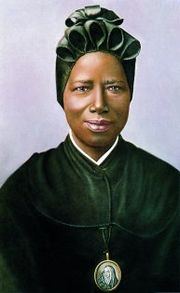 “The deadly crime of human trafficking” must be highlighted by today’s Christians, said Pope Francis yesterday.

His Holiness was speaking on the feast day of St Josephine Bakhita, patron saint of human trafficking victims, during an audience with members of the Galileo Foundation.

The foundation was established two years ago by John McCaffrey, a former director of fundraising of the UK’s Labour Party. Some of the organisation’s activities, particularly in the area of education and advocacy and in support for strengthening Catholic/Anglican relations, have a strong UK focus.

However, the foundation also raises funds to support the Christian communities of the Holy Land, and it provides financial backing to endeavours that address the problems of climate change and endemic poverty. It also supports initiatives that tackle modern-day slavery and human trafficking.

These last two issues were very much on the mind of the Pope when he met members of the foundation in an audience yesterday, especially as it was the feast day of a saint who spent 12 years living as a slave after she was abducted as a child in Southern Sudan.

When St Josephine Bakhita gained her freedom she converted to Catholicism and joined the Cannosian Sisters, travelling to the order’s convent in Schio in northern Italy, where she became well known, not least because her life story, when published in 1931, was an Italian bestseller.

Reflecting on the life of the saint, who was canonised in 2000, Pope Francis said: “She knew from painful experience the reality of slavery and its humiliating consequences. Yet, by God’s grace, she also came to know true freedom and joy.”

His Holiness told the foundation’s members that the holiness exhibited by the sister, who is now patron saint of Sudan, is “a summons not only to fight with greater determination against modern forms of slavery which are an open wound on the body of society, a scourge upon the body of Christ and a crime against humanity, but also to learn from her great example”.

“It is an essential duty for Christians today to highlight the plight of those who suffer from exploitation, and the deadly crime of human trafficking,” the Pope said.