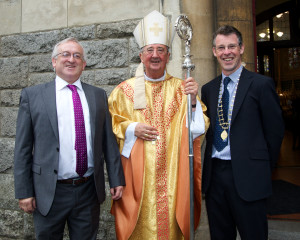 Synge Street CBS, the iconic secondary school in Dublin’s South Inner City, is looking for a new principal, following the retirement of Michael Minnock, whose 10 years at the helm made him the second longest-serving principal in the school’s 150-year history.

Deputy principal Claire Catterson is acting principal at present, and the Board will start a new trawl next month for a new Principal.

Offaly native Minock has decided to pursue a doctorate in Maynooth.

“It will be on ‘Passing on the Torch’,” he explained, “and I’ll be exploring whether it’s possible to pass on the torch of faith in a setting where many of the pupils are not associated with Catholicism, and where many others are baptised and confirmed, but that’s where it ends.”

It’s a subject close to his heart, as he came to a much-changed Synge Street in 2005.

In its heyday, the school had a student population of 700, but for the past 20 years it has been a DEIS (Delivering Equality in Schools) school, with a roll-call between 250 and 270.

Situated in a disadvantaged area, it is a constant battle to pay the bills.

Michael was the school’s third principal in four years, so stability had to be restored. “As Principal, you are the face of the school,” he said, “you can set a tone. I don’t panic often and, as a result, people all around settle down.”

He was also very conscious that, despite its large number of Muslim students, Synge Street was a Catholic school, and he was anxious to retain its Catholic ethos. “All celebration events centred around the Mass,” he explained, “and I had Mass as part of my retirement celebrations.

“The question is: is there something distinct about our Catholic ethos, and if there is we should preserve it, and if not why bother? Regardless of ethos, though, our principal area of concern is for our pupils.”

In this respect, Michael can point to a number of solid achievements during his tenure.

“First of all, I like to think I have restored a little pride. The pupils are very conscious of their heritage, and the theme has been to blend the past, present and future.

“Then, there has been a significant increase in those attending Third Level. When I started, seven percent went on to third level, last year we sent 78 percent to third level and further education.”

“The Creedon Trust (a €1m trust fund donated by the late Con Creedon) has been very instrumental in supporting our students. It began in 2006 with only three past pupils receiving support. In 2014, this had risen to 82 students.”

“Finally, the last decade has been an unparalleled period of success for the school – indeed for any school in Ireland – in the BT Young Scientist and Technology Exhibition. We jointly hold the record for most overall winners, but we are way out ahead of the pack for Intel Travel Award winners. The ultimate honour was won this year when we were named Best Overall School in Ireland.”

“To achieve this, teachers like Kate Walsh, Shane Freeman and Martha Nolan have put in a huge effort, aided and abetted by the legendary Jim Cooke.”

The cupboard was bare when Michael took over 10 years ago, so a lot of time has been spent on fund-raising.

“One of the most interesting was restoring the Oratory, which cost €40,000. The Brothers gave us a gift of €10,000 and we raised the rest through concerts.”

One of the most successful featured the Dunboyne Consort, of which he is a member, singing excerpts from Handel’s Messiah, which raised €6,000.

“In all, we spent about €2m on refurbishment work – new heating, windows, floor surfaces, etc – but we could spend another €2m, and you wouldn’t even notice it.”

One of the projects, which left him with mixed feelings was the school’s participation in an Immersion Programme, where he travelled with a group of boys to India.

“It was satisfying and dissatisfying,” he explained, “because we are a small poor inner-city school, and the two schools we were paired with in India were two of the wealthiest, with some pupils driven to school in chauffeur-driven cars. We thought we were there to become familiar with poor people, so we discontinued our involvement.”

Michael’s final fund-raiser was the publication of the book, “Never A Dull Day”, to mark the 150th year. Sponsored by past pupil Brian McElroy, a funeral director, the book has achieved significant sales.

“It has met my expectations,” said Michael, “and it has also saved us money as the class of 2015 each got a copy, replacing the cost of €1,000 we spent the previous year for presentations.”