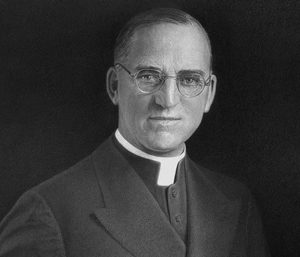 The founder of ‘Boys Town’ made famous in the Spencer Tracy movie of the same name was recalled in a one-day conference during Heritage Week 2017 in Roscommon on Thursday.

Among the speakers at the ‘Father Flanagan Conference’ was Bishop of Elphin Kevin Doran, who focussed on Edward Flanagan’s path to holiness and the lessons that can be learned from him today.

Eighth of eleven children, Edward Flanagan grew up in a family of faith. From his father, he heard stories of adventure, the struggle for Irish freedom and the lives of the saints, said Bishop Doran. “He [Edward Flanagan] also tells us: ‘it was from his life I first learned the fundamental rule of life of the great Saint Benedict, pray and work.”

In 1904, aged eighteen, following his secondary education in Sligo, Edward and his sister left for the United States, where he studied arts and pursued studies for the priesthood. In 1912 he was ordained a priest for the Diocese of Omaha.

The backdrop to Fr Flanagan’s formation, ordination and early ministry was the Industrial Revolution, where “profit took precedence over people” and “many workers were exploited for low wages” said Bishop Doran. In 1891 Pope Leo XIII had written his encyclical letter Rerum Novarum, a critique of both the Industrial Revolution and the response of Marxist socialism. “It called for the State to exercise its responsibility in vindicating the rights of workers,” Bishop Doran told the audience in Roscommon Library.

“[This] might explain to some extent why he [Fr Flanagan] was not prepared to stay quietly behind the altar rails, but rather saw it as part of his responsibility, precisely as a priest, to engage himself actively in the care of the homeless, and subsequently of homeless children.”

In 1917 he founded a home for homeless boys in Omaha – Boys Town. 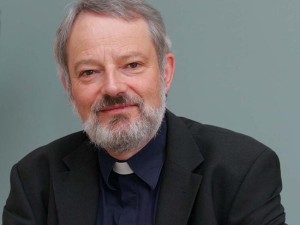 The personal philosophy which motivated Edward Flanagan in his mission to young people is easily found in his writings, said Bishop Doran. One element was “his fundamental belief in the goodness of every person.” Fr Flanagan insisted “there is no such thing as a born bad boy”. The priest believed “the problems caused by juvenile delinquency could not be laid entirely at the feet of young people themselves”.

He believed the power of love was the most effective power for change, and he was against a penal reform system. “I do not believe that a child can be reformed by lock and key and bars, or that fear can ever develop a child’s character,” he wrote. When he travelled to Ireland in 1946 he was appalled by the children’s institutions, describing them as a “national disgrace”.

Despite some personal misgivings, Fr Flanagan’s bishop, Jeremiah Harty of Omaha, endorsed the Boys Town experiment, and Fr Flanagan set up the Boys Town community ten miles west of Omaha. It grew with its own boy-mayor, schools, chapel, post office, cottages, gymnasium and other facilities where boys between the ages of 10 and 16 could receive an education and learn a trade. 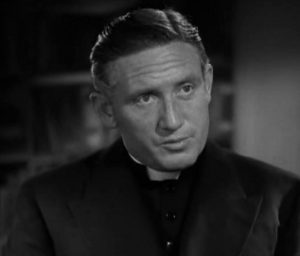 Spencer Tracy playing Fr Flanagan in Boys Town, for which he got best actor in 1938.

The Boys Town founder also believed everyone was created for “relationship with God”. It is only in God that “we find our own true peace”, continued Bishop Doran. Therefore, “moral training should be built upon the firm foundation of religious education, because morality is an expression of love and ‘God is love’.”

The Cause for the Beatification of Fr Flanagan began in the Diocese of Omaha in 2012, and the priest was given the title Servant of God. The investigation into his heroic virtue was completed and forwarded to the Holy See in 2015.

Is Fr Flanagan a saint? asked Bishop Doran. “I have often said to young people preparing for Confirmation that a saint is usually a person who lives a life of prayer and care. He [Fr Flanagan] encouraged others to pray, not just by his words, but by the witness of his own life. Prayer drove him out to care, first of all, for the homeless and then for the street children.”

He concluded that Edward Flanagan might have a “prophetic impact” in our times in a number of ways: first, that his contribution to the welfare of children was motivated by God’s love: faith contributes to good citizenship. Second, Fr Flanagan would question a society “in which people seem to accept that nothing can happen without state funding or state control”. Third, he would challenge a society which “builds office blocks while children live with their parents in emergency accommodation or on the streets”. Fourth, Fr Flanagan’s life “challenges us to look again at the role of parents in handing on the faith to their children” and not leaving it exclusively to teachers. Finally, the Bishop believed Fr Flanagan “would stand shoulder to shoulder with those who seek to protect unborn children from any ideology that would see them as disposable for any reason”.