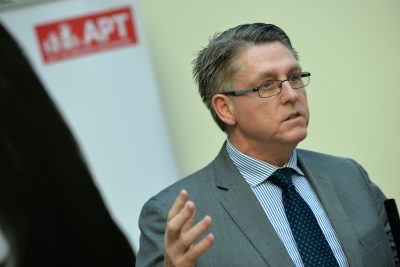 Healthcare professionals can play a major role countering the scourge of trafficking, according to Ireland’s Representative to the Council of Europe Group of Trafficking Experts (GRETA).

In his address to the first national conference on trafficking organised by Act to Prevent Trafficking (APT) and AMRI, Kevin Hyland OBE, who helped found the Santa Marta Group, a church and law enforcement initiative combatting modern slavery, said research in the UK had revealed that one in five identified potential victims of human trafficking entered healthcare support at some stage during their exploitation.

Mr Hyland also highlighted to the 120 delegates attending the “Human Trafficking: Hidden in Plain Sight” conference a finding which showed that 13 per cent of NHS staff interviewed said they had encountered five or more trafficked people in the preceding 12 months period.

“In the UK, I worked with the Royal College of Nursing and Chief Nursing Officer, developing awareness with a range of materials advising nursing staff and other healthcare professionals of the indicators of human trafficking and what they should do,” Mr Hyland explained.

Mr Hyland called on the Irish Government to take more tangible action to ensure that Ireland becomes a “hostile place” to trafficking and exploitation.

“I believe prevention is needed in destination, transit and source nations. This is where healthcare has a major role to play,” he said. 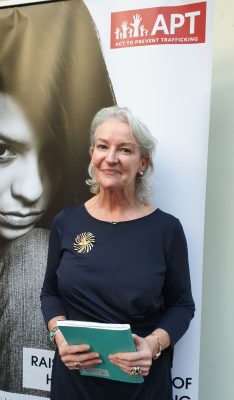 Anne Kelleher, communications officer with APT, also expressed regret over Ireland’s demotion to Tier 2 in the Trafficking in Persons Report.

Speaking to CatholicIreland.net at the conference, which was hosted by the Department of Justice in Dublin, Ms Kelleher said it appeared that the TIPP review body felt Ireland had not taken sufficient action to convict those who had broken the law.

“We have to take action to nudge people towards convictions. I think there is a recognition that trafficking is an activity of hardened criminals and that is slowly sinking in. Gradually people are beginning to ask why aren’t there convictions and where are the convictions.”

She paid tribute to the 120 representatives of NGOs involved in trafficking prevention work or awareness raising who attended the conference on Friday and were “very committed to ensuring that the criminality behind human trafficking is addressed”.

Referring to the recent RTE docu-drama Taken Down, she said it had acted as a mechanism for awareness raising and for creating a conversation across generations and across Irish society as well as giving a voice to the voiceless.

According to Mr Hyland, governments and large businesses can play a crucial role in the prevention of trafficking and slave labour.

“The cell phones we carry. The cobalt for the battery is likely to have been mined by a child as young as 8 in the Congo. The nice clothes we are wearing, sold in reputable stores – were they manufactured by forced labour in sweatshops in Bangladesh, Birmingham or Leicester?

“Or as discovered this year, the protective gloves worn by NHS staff were manufactured by people exploited in south–east Asia. And the list could go on, including in fishermen, recycle plants, mushroom farming and trafficking for sexual exploitation all here in Ireland.”

The fishing industry is an area which had been raised at the Santa Marta group.

“There are people that travel from countries like the Philippines and Indonesia to other parts of the world for work. When they arrive in countries or end up on vessels in places like the Pacific, their conditions can be shocking. Their pay may be withdrawn. Because they are at sea and on a particular visa system they can become very vulnerable to exploitation.

“No one in Ireland would expect anyone to work in conditions where they are being threatened, beaten and held against their will.”

On the matter of trafficking, Mr Hyland said, “The Irish Government is taking this seriously, but we need to see tangible action whereby Ireland becomes a hostile place to engage in trafficking.”

Mr Hyland was appointed as the UK’s first Independent Anti-Slavery Commissioner in November 2014. He received an OBE for services to combating human trafficking” in 2015.

Prior to this role, Mr Hyland had a 30-year career as a police officer, and was formerly head of the London Metropolitan Police’s human trafficking unit.

Mr Hyland was also involved in the establishment of the Santa Marta Group, a body comprising international law enforcement agencies, civil society, non-governmental organisations and the Catholic Church, of which Ireland is a leading member.

The group was launched by Pope Francis at the Vatican in April 2014, and is named after the Papal residence, where delegates stayed during the first meeting.

At the launch Pope Francis described human trafficking as “an open wound on the body of contemporary society; a crime against humanity”.

The group was developed by the Catholic Bishops’ Conference of England and Wales in collaboration with the London Metropolitan Police, and is led by Cardinal Vincent Nichols, the Archbishop of Westminster.

As part of the Santa Marta Group, Mr Hyland is currently the chairman of an all-island research project at Mary Immaculate College Limerick, which is supported by the Department of Justice and Equality and An Garda Síochána.