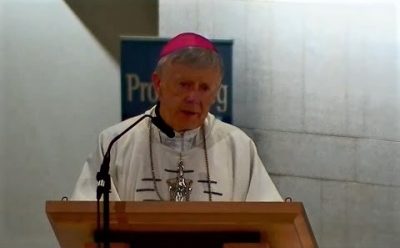 Archbishop Michael Neary of Tuam has said he is convinced that there are young people who are searching for faith opportunities to share with others but find it difficult to find a suitable structure.

He urged the Legion to help them to harness their generosity and joy in the service of people in need.

Next 7th September 2021, the Legion of Mary will mark the centenary of its founding in Ireland.

Dr Neary noted that long before the Church began to emphasise the role lay people and the importance of various lay ministries, the Legion of Mary was active. In many ways, he said, it was “way ahead of its time”.

Founded in Dublin by a group of fifteen women under the leadership of Frank Duff, it now has members in each of the five continents and is particularly strong in South Korea, the Philippines, Brazil, Argentina and the African countries.

Archbishop Neary said the Legion of Mary was deeply rooted in the Gospel. He said founder, Frank Duff, envisaged the Legion as an opportunity for Catholic lay people to fulfil their baptismal promises to be able to live their dedication to the Church in an organised structure which would be supported by fraternity and prayer.

He referred to the “wonderful work” of Venerable Edel Quinn and her heroic ministry in Africa in the 1930s and 40s as well as the work of Alfie Lambe in Latin America, particularly in Argentina.

“At times perhaps we are guilty of not extending a challenge to others, informing them about the work which the Legion of Mary does and inviting them to become involved, I am very conscious of the leadership that can be provided at local level,” the Archbishop said.

He prayed that as the Legion prepares to celebrate its centenary next year, its member will be inspired and encouraged by the wonderful work which the Legion of Mary has done in 170 countries across the world.

He said he was also reminded of Pope Francis’ observation that holiness is courage, hope, and daily conversion.

On 27 March 2014, the Secretary of the Pontifical Council for the Laity, Bishop Josef Clemens, delivered the decree recognising the Legion as an International Association of the Faithful.