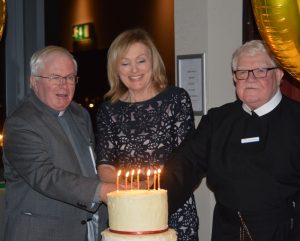 The 80th anniversary of the Redemptorist publication, Reality magazine, was a proud moment. Marking the event on Wednesday night, Redemptorist Provincial, Fr Dan Baragry CSsR, said that any 80th birthday was worth celebrating, but to have survived this length and in the climate in which we live was nothing short of a miracle.

The magazine’s 80 years of circulation was a sign of its “resilience and strength” and this in large part was due, he said, to the fact that “from its beginning Reality’s purpose was never to promote just the Redemptorists. At its core it was about something more significant and profound – about seeking to promote the word of God and to make the Gospel relevant in the life of ordinary Christians.”

This it did with some success, said Fr Baragry, presenting “the issues of human living in (hopefully) prophetic ways. This is the reason it has survived changing times and situations in the Church and in society.”

Looking back in gratitude and forward in hope, Fr Baragry singled out former editor, Fr Gerry Moloney, who has been ill for some time, for particular mention. “Without his huge dedication to the magazine we would not have survived,” he said.

“My prayer is that Reality will continue to be a source of hope and light for many years to come,” he concluded.

Nationwide presenter Mary Kennedy told her own faith story to the audience, describing her childhood growing up in Clondalkin where she attended the Presentation Convent school. While they were sent home with other religious publications, they were never given Reality. “I think it was too controversial and challenging. It wasn’t safe!” she said.

Describing herself as an ‘à la carte Catholic’, she told of how she had grown up in a traditional Catholic family where they recited the family rosary after dinner each night, and her mother would put out the best china when she heard the parish priest was visiting the street. As he approached, her mother would be “reversing out of the sitting room hoovering”. The relationship with the priest was “respectful but artificial”. At times, notably during an early confession, she had been hurt by the insensitivity of certain priests. “That was the Catholicism I grew up with.”

But now, to her surprise, she said, she was “back”. “I love the rosary. It is like a mantra for me – it soothes me”, and she loves the Eucharist. “I love going to Mass. It is calming and I feel a connection with the people around me, the priest and with Jesus.” But she said there were things about the Church she could not accept like compulsory celibacy for priests and the “problem with the position of women in the Church”.

“I can’t understand why women don’t have a more meaningful part to play,” she said.

Ms Kennedy said the magazine is true to its ethos to “inform, inspire and challenge”. She said “I look forward to the next stage [of its history] where maybe those issues can continue to be questioned and challenged and I think it would make for a wonderfully modern, inclusive, loving, compassionate and just Church.”

Current editor, Fr Brendan McConvery CSsR, traced a brief history of the publication, which began its life as the Redemptorist Record through its several editors, staff and promoters. He reminded those present of memorable pamphlets like ‘The Devil at Dances’. He recalled how editor Fr Michael O’Connor had brought in lay advisors like Maeve Binchy and how distributors like Seamas Campion (who was present) “wandered through Ireland in a car selling Reality and talking to promoters”. For this he was paid £8.00. “If no one offered him a bed, he would sleep in the car. That’s dedication.”