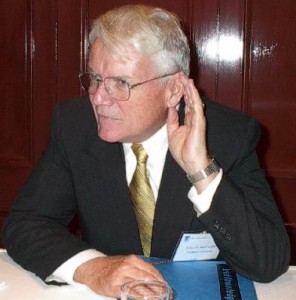 A retired Professor of history at one of America’s top universities has strongly criticised the “intolerance and disregard” of Catholic positions by many working in the Irish media.

In his address, ‘What happened to Catholic Ireland: an Irish-American historian’s view’, Professor John P. McCarthy of Fordham University in New York said he was apprehensive about the position of the Church in contemporary Ireland. “There is a hostile, unfair, and often dishonest atmosphere in the media.”

He warned that this attitude towards the Catholic Church was also evident in the present Government. “The intolerance and disregard for religious positions, especially Catholic positions, by many in the Irish media, forms the thinking of political speechwriters, particularly those of the Taoiseach,” he said.

The academic cited the Taoiseach’s address in response to the publication of the Cloyne report. “That was obvious in his speech for the closing session of the Dáil in 2011 in which he alluded to ‘the dysfunction, disconnection, elitism – that dominate the culture of the Vatican to this day’ and insisted he would refuse to be intimidated by ‘the swish of a soutane’ and ‘the swing of a thurible’,” he said.

In his lecture on Tuesday evening in Dublin, Professor McCarthy suggested that compounding the hostility of political leaders and the media, was the fact that many in the Church were “moved by a spirit of accommodation.”

“Some clergy are critical of the Church position on contraceptives, homosexuality, and a male only clergy, as well as any insistence on the importance of clerical dress and the isolated training of priests.”

He said it was against the background of in-house criticism, and political and media hostility, that the Eucharistic Congress was held in Dublin in June last year.

While not having the numerical strength of the earlier Congress, the 2012 gathering displayed “an intensity and commitment that leaves one hopeful for the Church in Ireland.”

Though the Church has a diminished position in Irish life, culturally, socially, and politically, faith itself was now central.

By not accepting the changing values of the democratic process the faithful may well become a remnant in what had been a Catholic society, Professor McCarthy warned.

“That burden of keeping the Faith will be all the more daunting given the increasing intrusion of state authority in individual, familial, and communal matters.”

Professor McCarthy is a former Director of the Institute of Irish Studies at Fordham University as well as a member of the Executive Council of the American Irish Historical Society.

He has been a commentator on Irish issues for the Public Broadcasting System, the BBC, the Canadian Broadcasting Company and RTE.

In 2006, Dr McCarthy was awarded an OBE for his efforts in the Northern Ireland Peace Process. He is also the author of many research papers and books. His most recent book is ‘Twenty-First Century Ireland: A View from America’.

Another parallel he drew between the experiences of both the Irish and American churches was “an enthusiastic misinterpretation of the Second Vatican Council.”

In his analysis, he said “Freewheeling liturgical experimentation and blunt challenges to episcopal authority were not as open here. But there was among the ordinary clergy and religious, not to mention the laity, a mixture of passivity and thoughtless acceptance of change as well as an increasing assumption that all most anything was permissible.

He said one area where this was evident was the individualisation of the hitherto communal life of religious orders, “which has contributed in no small way to the diminution in their numbers.”

Another was in church architecture where structures more and more assumed the character of gymnasia, meeting halls, or modernised replicas of Newgrange.

He said this spirit was most disastrous in the dilution of religious instruction. There was a passive assumption that children were receiving proper catechetical instruction in the schools under Catholic management.

So long as the First Communion and Confirmation exercises were conducted everyone seemed content, with little thought as to the content or depth of religious instruction or encouragement of religious devotion.

“The lessening of religious sensitivity, the growth of indifference, and the actual loss of faith occurred almost unawares. It was unlike what happens when an overtly hostile political regime imposes restrictions on religion, as in Eastern Europe right after the war.”

In fact, leaders of the Irish Church had an unwarranted sense of confidence in the late 70s and early 80s because of certain events; the 1979 Papal visit, the 1983 anti-abortion referendum, and the 1986 rejection of a divorce referendum. However, within a decade things had turned quickly the other way.

The next decade and a half would be a long night of the soul for the Catholic Church in Ireland in view of the numerous revelations of sexual abuse by priests and religious in parishes, schools, and, especially, industrial homes, and hierarchical lack of concern.

The Church has seriously undertaken the necessary remedial steps. However, as is often the situation in history, severe hostile reaction, even revolution, often occurs after remedial actions are undertaken.

Referring to the hostile, unfair, and often dishonest atmosphere in the media in Ireland towards the Church, he said things are different in America, where even media figures who are not particularly religious themselves generally give a forum to church figures and their allies.

In addition, there are a greater variety of media options, especially radio stations and cable television, giving options other than establishment political correctness.

Even very liberal political figures go out of their way to show some deference to religious spokesmen.

It says something about the remaining strength of religion in America that both political parties had Cardinal Dolan of New York deliver the invocation at their national conventions.