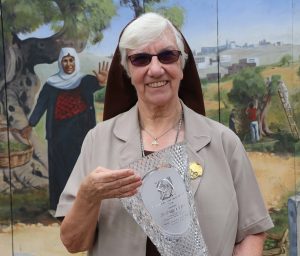 Sligo-born Franciscan Sr Bridget Tighe, who last month won Trócaire’s inaugural Romeo International Award, has given a very grim description of what life is like for the 1.8 million Palestinians who live in Gaza.

Writing on the Irish overseas aid agency’s website, Sr Tighe contrasted her own happy childhood in Ballindoon, surrounded by beautiful coastlines and sandy beaches, with the life of the children in Gaza, where much of the infrastructure has been destroyed by Israeli defence forces.

“When you first arrive in Gaza, it too seems just as beautiful – with miles upon miles of blue Mediterranean Sea, lovely buildings, hotels and shops full of food,” the missionary wrote. “Very quickly, however, you realise that the childhoods in Gaza are worlds apart from ours, and the peace, safety and carefree lives we enjoyed as children just don’t exist here.

“Standing at the seaside, you smell the stench of raw sewage being pumped into the water making Gaza’s tap water toxic and undrinkable. Although there is food in the shops, people have no money buy it. And in front of the lovely buildings, children fill the streets, begging for money – the only way many families can afford even a loaf of bread.

“There is no time for school, and no time for play. Children know nothing about peace or what it means to have a normal and happy childhood. Some have already survived three major wars and have lived through horrors no child should ever know,” Sr Tighe wrote.

Comprising 365km2 of land, blockaded on all four sides by the Israeli military who control all access and all movements of food, goods and medicines, Gaza has been described as the world’s largest prison.

“The people are living in extreme poverty, without access to clean water or basic sanitation. And inevitably, many people become sick.

“Gaza’s medical services are being stretched to breaking point. The hospitals are understaffed, there aren’t enough beds and medical supplies are running critically low. Even if you need emergency medical care, you can’t leave Gaza. Not without permission from Egypt or the Israeli Government. People in Gaza are trapped.”

Sr Tighe has been serving in Gaza for the last five years in a clinic that treats up to 100 people a day. Many patients have wounds that have become seriously infected, so that often limbs must be amputated.

She tells the story of one young father of six who was waiting to see the clinic’s doctor. “Desperate to feed his family, he had brought them to a camp along the border to find food. But instead he was shot at. Can you imagine getting shot searching for food to feed your family?

“This is life in Gaza. No food. No money. No health care. Living in fear. The situation is reaching crisis level and is close to becoming unliveable. It is a life that many in Ireland could not imagine, but sadly it is reality for millions.

“Thanks to the support of people in Ireland, we are able to help bring much-needed medical support to people suffering in Gaza, and despite the pain and misery they face, they continue to smile through it all. They have been through so much, have so little, and yet they carry on and are so grateful for the care they get.

“For me it is a privilege to be in the Holy Land, and to walk the same ground Jesus would have, doing my small part to help those who need me most as best I can. I love Gaza and for as long as I am blessed with good health and energy, I will continue to help the children, women and men who call Gaza home,” Sr Tighe wrote.

You can donate towards Trócaire’s humanitarian relief efforts through Trócaire’s website.