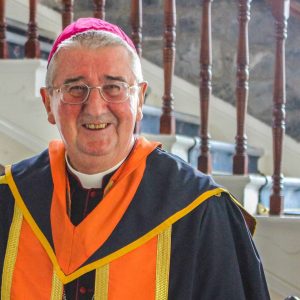 The Archbishop of Dublin, Diarmuid Martin, has been named an honorary fellow of Griffith College because of his “outstanding contribution, at home and abroad, to Ireland’s moral ethos.”

Speaking at an awards event at the college on Dublin’s South Circular Road, Dr Martin said it was a special pleasure because of his connection with the area.

“I was born in the Old Coombe Hospital and my mother’s family history was deeply entwined with the south inner city. I lived right opposite Griffith College for many years and my brother lives just 200 m from here still today,” he said.

The archbishop continued: “The values which impregnated my life from my early years were the values which I inherited from the people and the community of this part of Dublin. They were values of honesty and integrity, good neighbourliness and hard work and fair play, as well as a quick sense of humour, a sense of not taking oneself too seriously, but also a deep sense of the personal worth of and the value of investing in the capacities of young people. Families gave so much so that their children could do better than they did.”

The award received by the archbishop is described as “an annual award made to men and women from the island of Ireland who have within the context of their own profession pushed forward the boundaries of academic interaction and educational development.” Recipients are viewed as “role models for the Irish youth of today.”

Accepting the honour, Dr Martin said: “As a religious leader in a society which is more and more secularised I have to reflect on how faith can contribute to this process of education and the grounding of values. The debate between faith and culture is not something esoteric for the experts. It is vital for the healthy growth of a pluralist society.

“There are some who would look on the introduction of faith into debates about educational policy in more secular societies as an obstacle to common reflection. For them it would be the introduction of a divisive element. But we should also remember that a certain sense of narrow secularism can indeed become hostile to pluralism.

“In a pluralist society the Church cannot claim establishment privilege. Believers and the Church must not however feel or be told that they must retreat from a robust presence in the public square.

“Not too long ago I received a letter from a diplomat with whom I had to engage over years in robust dialogue and robust difference of position. We never fully agreed on a common position, but we came nearer on many things. I was really pleased with the final comment of his letter: ‘We never came to agreement, but I want you to know that you were always our favourite enemy.’”

Archbishop Martin said that “Difference should not lead to antagonism. Working together to seek the values which underpin our human interaction is vital, especially in the current international climate.”