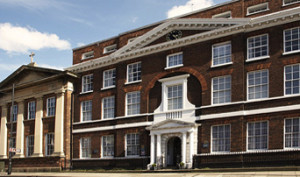 It may seem a long journey from Greenham Common’s peace camp to religious life, but a former member of the 1980s peace movement, who has just been professed, sees no contradiction between the two.

Last Saturday, an international crowd of friends, family and Sisters from as far as Chile, Korea and Slovakia, as well as England and Germany, gathered to witness Sr Naomi as she made her first profession as a Sister of the Congregation of Jesus in York’s historic Bar Convent.

The fifty-three-year-old made her vows of poverty, chastity and obedience to Sr Jane Livesey, the first British general superior of the congregation in over two hundred years.

“I felt called to religious life when I converted to the Catholic faith at university in Cambridge”, Sr Naomi explained “but there was no clarity to the call, so I got on with life and waited for things to get clearer”.

Naomi worked on archaeological digs for the British Museum before doing a doctorate in Turkish archaeology. She subsequently worked as a jeweller and an administrator in the NHS.

“That original call returned in a way that I couldn’t ignore, so I began to research religious orders and found a strong attraction to Mary Ward and the Congregation of Jesus,” she told ICN.

During her two-year period of training as a novice, Sr Naomi did pastoral placements in a home for dementia sufferers, in youth ministry and in a homeless hostel for young people.

“I was specially drawn to the ministry of justice and peace-making”, she says, “as it echoes the six months that I spent at the peace camp in Greenham Common in the 1980s.”

“Catholic Social Teaching calls on the same ideals as many of us shared in the peace movement. For the next few years I will be studying theology in London’s Heythrop College and doing more pastoral placements to help me explore further what God is inviting me to in religious life,” she explained.

The Congregation of Jesus was founded by Yorkshire woman Venerable Mary Ward in 1609. It was the first attempt to found an order of women modelled on the Jesuit charism.

The freedom and mobility that this required was thought impossible for women of the time and drew great opposition within the Church.

But Venerable Mary Ward (1585-1645) was not cowed. “There is no such difference between men and women” declared the pioneering foundress, “that women may not do great things”.

The order was suppressed by papal bull in 1631 but subsequently spread from Germany and England across the world.

Today there are Sisters of the Congregation of Jesus and Institute of the Blessed Virgin Mary in every continent.

Mary Ward was declared Venerable in 2009 by Pope Benedict XVI, who was educated in kindergarten by the Congregation of Jesus in Germany.

Sisters of the Congregation of Jesus have been working in education from the England’s oldest convent since 1686.

In Ireland, the Loreto Order, a sister congregation of the Congregation of Jesus, are renowed for education through its many schools.

The Poor Clares in Nun’s Island in Galway also trace their roots to a foundation made by Mary Ward in Gravelines prior to her calling to found an apostolic institute.