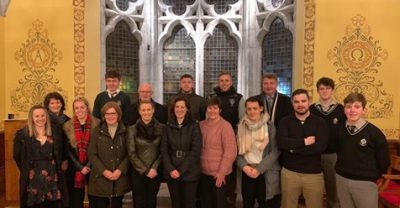 A lack of parental involvement is the greatest threat to Catholic education, according to Bishop Dermot Farrell of Ossory.

In his homily at a Mass for principals and teachers of religion for Catholic Schools Week, Bishop Farrell warned, “Many parents in Ireland today rarely have integrated faith lives that connect them to the Church in general, or their parish in particular. Without those connections, their children are likewise disconnected.”

He told the assembled Catholic teachers and school management that they should be clear that they are not the primary educators of children and young people.

The family, he said, remains “the privileged place of encounter and growth – parents are the first teachers, the home is the first school of humanity.”

The Bishop said this did not devalue or diminish the importance of the subjects of the school curriculum, nor did it interfere with their autonomy.

“Rather it means the whole community sharing vision of the human person and the purpose of human life with its members, particularly young people.”

But Bishop Farrell also stressed that “if the community of faith does not recognise the importance of sharing through education its understanding of humanity embraced by God’s love, we risk losing an immeasurably valuable heritage. If that happens, our whole society will be much the poorer.”

He warned that the loss of an educational tradition based on the Gospel vision of human worth and dignity would lead to a widespread obscuring of the true nature of education as a preparation for life.

Discussing the role of Catholic schools, Bishop Farrell said they can assist parents and families by helping young people find moral reference points and by offering a morals and values framework, or roadmap, to guide them.

“The Catholic school ought therefore to be a community inspired by Gospel values and transmitting Gospel values, including the sacredness of human life, the dignity of the person, integrity, peace, tolerance, justice, honesty and truth, holiness, gentleness and compassion, mercy and forgiveness, purity, respect.”

Faith, he stressed, is not simply learned and memorised, it is transmitted and experienced.

“The domestic church is not constructed in a day – but built up over time, growing with the family through the witness of the parents, the things filling the house and the conversations encouraged and shared.”

Separately, in his homily for Catholic Schools Week at the Cathedral of the Immaculate Conception, Sligo, the Diocese of Elphin’s Vicar for Education, Rev Dr Michael Duignan said a truly Catholic school, firm in its Catholic identity and precisely because of its Catholic identity, could at the same time see itself as a living “courtyard of the Gentiles”.

He said a Catholic school is a “special place where pupils, teachers and parents of different viewpoints learn respect for each other, get to know each other, dialogue with each other, and embark together on that great adventure of opening the doors of both the mind and the soul to life’s deep-down questions”.

He expressed regret over the way some misrepresent or denigrate and undermine “the great work being done the length and breadth of this country in Catholic schools”.

He added, “It is no harm to remind ourselves that Catholics do not just run schools for the sake of running schools – or as some might like to portray – for the sake of indoctrinating young minds.”

Fr Duignan said that as a faith community, schools were run in response to parents’ wishes to have their children spend their formative early years in a context that supports a faith-based vision of life.

Should parents no longer wish to have such a faith-based educational environment for their children, he said, such local Catholic schools would, inevitably, one by one, cease to exist.

“In the future, our local Catholic school may not be our nearest school but rather a school some distance away. Clear choices and even sacrifices will then have to be made by parents who wish their children to be educated in the unique environment that a catholic school is,” Elphin’s education consultant said.

He said that as local communities are today made up of people of different and sometimes contrasting religious beliefs and those of no belief at all, it was only natural that schools reflect this situation. “And our schools certainly do,” he stressed.