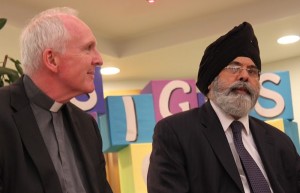 The powerful gift of dialogue was explored at a Focolare summer gathering in Liverpool last week.

One hundred and twenty Irish people, including many young people, travelled to the event at Hope University which was jointly hosted by Focolare in the UK and Ireland.

Bishop Brendan Leahy of Limerick was among the Irish delegation.

Addressing the summer gathering, entitled ‘Signs of Hope’, Bishop Leahy said that when Focolare started in 1943, Chiara Lubich and her companions could “hardly have imagined that the spirituality that was coming to life would one day be shared by Muslims, Sikhs, Buddhists and Jews”.

The Bishop of Limerick traced the circumstances which opened up Focolare’s strong inter-Church and inter- religious dialogue.

It began in the late 1960s with the movement’s first tentative meetings with Lutherans and Anglicans and continued through to forging links with Muslims and Buddhists in the 1990s and finally with Hindus around 2000 when Focolare founder, Chiara Lubich, was awarded the ‘Gandhi Defender of Peace award’.

Presenting the Focolare’s style of dialogue, Bishop Leahy focused on some key points: each person is a candidate for universal brotherhood and Jesus’ commandment of love.

“Love is the characteristic method in its dialogues. Also because members of other religions share the Golden Rule in common in all religious texts,” he told a plenary session entitled ‘Hope for Dialogue’.

Quoting Focolare founder Chiara Lubich, the bishop said that to dialogue “we need to enter into the skin of the other, see the world as the Jews, Buddist, Muslim would see it. To make yourself one demands we be poor in spirit, poor in the spirit in order to be rich in love”.

“By doing this we create a space of dialogue. Sharing insights we grow in unity, truth and love and respectfully proclaim our faith perspectives,” Dr Leahy commented.

A leader of the Sikh community in Ireland, Dr J.S. Puri spoke of the difference between toleration and acceptance.

“Acceptance is much stronger than tolerance. With acceptance you stand together. Love and respect lead to acceptance,” he said.

The best teacher is the light, Dr Puri continued. “God has created the light and infused it in all of us.”

He said his involvement in Focolare began when a group of young people from the Focolare came to the Sikh temple in Dublin and then youth from the Sikh community became involved in a fun-run promoting love and unity: Run4Unity.

Also speaking on ‘Dialogue for Hope’ was Dr Mohammed Ali Shomali, Director of the Islamic Centre of England, who received a standing ovation for his contribution.