Spending madly in the sales will give some satisfaction but leaves you empty - Archbishop. 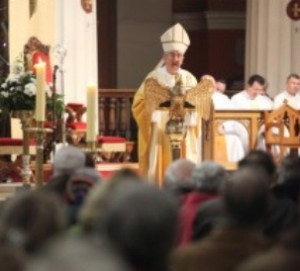 Archbishop Diarmuid Martin of Dublin has urged people not to “get lost in the rush” of the post Christmas sales and lose sight of the fact that Christmas is not just a day but “a way of life.”

Speaking to CatholicIreland.net at St Mary’s Pro Cathedral, the Primate of Ireland said that by spending madly in the sales “we get some satisfaction but it leaves you empty.”

“The great thing about Christmas is those moments when we stop and reflect and have the chance to see childhood again. We realise it is the simple things in life that are the most valuable,” he said.

“Christmas has to be a time of caring and not just of looking after ourselves,” he said and added that the generosity experienced by the Crosscare food bank, which received 70 tons of food from the public following an appeal for help, was going to be needed “right throughout the year to come.”

The Archbishop also referred to time he spent on Christmas morning with people whom Crosscare helps.

“There are a lot of lonely people – a lot of people who are on the margins. They really appreciate it when they encounter generosity. A lot of these people have been very unfortunate and have sad histories. The warmth of Christmas is something which means so much to them.”

He also warned the Government not to be “triumphalistic” about the departure of the EU/IMF troika, taking up on comments made by Bishop William Crean in his Christmas message.

The Bishop of Cloyne said that while the departure of the EU/IMF Troika might have given the country its “purse back” in political terms, he warned that, “Great hardship continues to be inflicted on fragile families and schools” due to the programme of austerity.

He called on the country’s political leaders to redress the austerity imposed on families and schools, “Otherwise, satisfying the markets will reap a very negative social harvest in Irish society,” he warned.

Archbishop Diarmuid Martin told CatholicIreland.net that every economic plan must have a special focus on the most vulnerable and the poor before, during, and after austerity.

“That is the job of economics and politics – to be alert to the effects on the most vulnerable and that is a challenge we have to face.”

He again criticised the level of youth unemployment in Europe, notable Spain and Italy, where it stands at 50 percent.

“Our figures are lower but they are still quite high. Today there are many tables where someone is missing because people had to emigrate – that is a great loss to our society.”