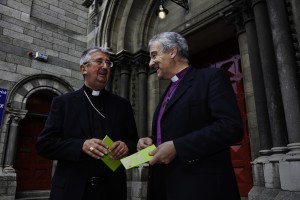 The Government has indicated that it wants those who wish to attend Easter Sunday services in their city centre parishes to be able to do so.

The Department of An Taoiseach on Tuesday issued a statement saying it hoped that further consultations could take place that would “provide reassurance to the Church of Ireland that it will be possible to facilitate access by parishioners” to Easter ceremonies.

The response followed news on Monday that one of the country’s best known and most ancient cathedrals was being forced to shut its doors to worshippers on the most sacred day in the Christian year by the organisers of the 1916 Easter Sunday parade.

Gardaí had requested that the front gates of Christ Church Cathedral in Dublin remain locked for Easter Sunday. In addition, a traffic cordon is being imposed closing off the city centre to all vehicles from 6am. This is intended to facilitate the smooth running of the parade itself and attendances of up to 500,000 people.

Six Church of Ireland city centre parishes in addition to Christ Church Cathedral and a number of other Christian churches would be affected by the restrictions.

In a statement on Monday, the Church of Ireland Primate, Archbishop Michael Jackson, who is due to lead Easter Sunday services at Christ Church Cathedral, criticised the parade organisers for their lack of consultation with the Churches and other faith communities affected by the extensive road closures.

Archbishop Jackson highlighted that, “This decision was made without consultation with the dioceses and there is a considerable sense of disappointment and sadness.”

He said parishioners who wouldn’t be able to attend services at their own parishes were being invited by Church of Ireland parishes in the city’s suburbs to join them instead.

The country’s most senior Anglican churchman said on Monday, “People will, understandably, be upset not to be able to worship in their parish churches on Easter Sunday.”

Speaking to the Irish Independent newspaper, the Archbishop said he was “taken aback and genuinely disappointed that there was no consultation”.

He also questioned the wisdom of holding the parade on Easter Sunday and not Easter Monday.

“Had circumstances been different, there might have been wisdom in those responsible for the decisions that have resulted in Easter Day being used as the day for the Commemoration, asking the question: ‘Why Easter Day itself and not Easter Monday for example?’” he commented.

Archbishop Jackson said the Church of Ireland had adopted a pragmatic approach, “Once we were made aware of the fact that the churches and the cathedral will simply not be accessible without insurmountable difficulty and the endangering of personal safety.”

But on Tuesday, the Department of An Taoiseach appeared to backtrack stating that its earnest wish was that people would be able to attend their usual places of worship on Easter Sunday if at all possible.

Responding to this, Dr Jackson issued a new statement in which he said the Church of Ireland “appreciate the Government’s response to the statement issued by the United Dioceses of Dublin and Glendalough on arrangements to facilitate people in inner city parishes in their worship on Easter Day.”

“We further appreciate the Government’s wish to do all it can to facilitate people in attending their usual places of worship on Easter Day if possible.”

“Having considered the traffic restrictions which are to be put in place from 6.00 am on Easter Day and the difficulties which would ensue for parishioners trying to access city centre churches, the Archbishop and affected clergy put measures in place in order to enable parishioners to worship in churches located in areas outside the cordon.”

He concluded his statement, “We are happy to consult with the organisers of the commemoration on this matter.”

Meanwhile, a spokeswoman for the Catholic Archdiocese of Dublin has indicated that “Mass will be definitely celebrated” at the Pro Cathedral in Dublin on Easter Sunday and that discussions with the parade organisers to try and improve access are ongoing.