Government urged to play role in finding peace for Syria 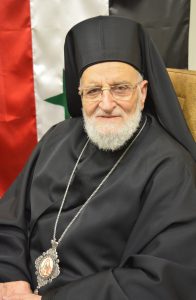 His Beatitude, Gregory III Laham, Patriarch of Antioch and All the East, and Alexandria and Jerusalem, world spiritual leader of the Melkite Greek Catholic Church. Pic: Sarah Mac Donald

As the UN Security Council prepares to hold an emergency meeting over the plight of the Syrian city of Aleppo, a delegation of Syrian religious and medical leaders arrived in Ireland on Tuesday in an effort to generate support for their efforts to promote peace and reconciliation in their war-torn country.

Thousands of civilians are reported to have fled Aleppo under fire as fighting and bombing continues and government forces advance against rebel-held areas in the east of the city.

The International Committee of the Red Cross said as many as 20,000 people have fled the city in the last three days, and food and medicine are running out.

The UN has said it is “extremely concerned” about the estimated 275,000 civilians trapped in “horrific conditions” in Aleppo and appeals have been made to the Assad regime and Russia to allow humanitarian aid to reach the remaining 275,000 people trapped in the besieged city.

Aleppo has been a key battleground in the war between forces loyal to President Bashar al-Assad and Western-backed rebels who want to overthrow him.

The regime’s forces have recaptured a number of rebel-held eastern areas with help from Iranian-backed Shia militias and Russian air strikes.

However, inside those areas, tens of thousands of people are suffering serious food and fuel shortages.

Speaking in Dublin ahead of meeting members of the Oireachtas Joint Committee on Foreign Affairs on Thursday, Syria’s highest ranking Muslim, Grand Mufti Dr Ahmad Badreddin Hassoun said, “We are calling on [the] Irish government to start talks on reconciliation” because of Ireland’s history of neutrality and “never invading another country.”

He is one of the delegation which also includes two high-profile Christian patriarchs, Gregory III Laham and Ignatius Aphrem II, as well as Dr Ahmad al Khaddour, a cardiothoracic surgeon and native of Homs, and Dr Bashir Mohammad, a cardiologist and a native of Hama.

Patriarch Gregory III Laham, the world’s spiritual leader of the Melkite Greek Catholic Church, explained that “As religious leaders we are peacemakers, we are for reconciliation – to make peace.”

He admitted that he had never understood why there was a war in Syria. Prior to the conflict, he said Syria was a modern and developed country where the various faiths lived together in harmony.

“It is time for peace, after five and a half years of war – enough, enough! All Syrians are now very poor people today,” he said.

Explaining why the delegation had come to Ireland, the Patriarch said, “I found a special sympathy in Ireland for Syria.” They are inviting politicians and members of the media to travel to Syria and see how life is on the ground for the people of Syria.

Both the Grand Mufti and the Patriarch stressed that if Western European countries wanted to help the people of Syria they should help end the conflict, foster reconciliation and provide the means to allow Syrians stay in their own country.

The delegation is looking for Ireland to send a fact-finding medical, religious, political and humanitarian mission to the Syrian Arab Republic for St Patrick’s Day next year.

In his speech to the members of the Oireachtas on Thursday, Patriarch Gregorios III will say that “Syria is experiencing a lengthy, painful, bloody way of the cross stretching over all the country’s roads. Suffering has gone beyond all bounds. There is no safe place left in Syria.”

But despite the current situation, they are sure that the government, political parties, oppositions, religious faiths of Sunni and Shi’a Muslims, Alawites, Christians and Druze “are capable of engaging in dialogue, and rebuilding an atmosphere conducive to reconciliation, in order to go forward together.”

Separately, the Russian ambassador to Ireland has hit out at Bishop Kevin Doran’s “ignorance” after the Bishop of Elphin expressed his “abhorrence” over Russia’s involvement in the conflict in Syria.

Bishop Doran had written to Ambassador Maxim Peshkov criticising Russia’s role in the “daily bombing of the innocent civilian population of Aleppo”, which he said was a crime against humanity.

According to a report in the Sunday Independent, Dr Doran said he was “aware that many factions and nations are involved directly or indirectly in the conflict and that Syria is being used as a theatre for the fighting of proxy wars, just as other countries have been used by the ‘great powers’ in the past.”

“All of these warring factions have some responsibility for the conflict and for the untold suffering that it brings to the ordinary citizens of Syria.”

“What sets the Russian Federation apart is the daily bombing of the innocent civilian population of Aleppo, which, like many people, I regard as a crime against humanity. I am quite certain the God who created all of these men, women and children in his image is not blind to what is being done to them or deaf to their cries.”

On 19 October, Ambassador Peshkov responded, “It seems the cause of your ignorance is one-sided preconceived western propaganda … the western mass media deliberately demonises Russia, labels it a killer nation of civilians in order to conceal the West’s crimes, including their support [of the] terrorist machine used as an instrument in western hands to oust the legitimate president of Syria.”