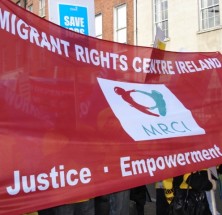 Ireland should take five times the 4,000 refugees it has promised to accept and 20,000 refugees should be welcomed under relocation and resettlement schemes.

This is according to 22 leading NGOs including the Jesuit Refugee Service, Mercy International Association and Misean Cara.

They spoke out at the launch of the report, “Protection, Resettlement and Integration: Ireland’s Response to the Refugee and Migration ‘Crisis’”.

The NGOs state that the Irish Government has not lived up to its commitments to provide a safe haven for people fleeing conflict.

“Ireland must share the responsibility of responding to this crisis and show that its commitment to offering a safe haven for people seeking refuge extends beyond rhetoric to concrete action,” said Eugene Quinn, National Director, Jesuit Refugee Service (JRS) Ireland.

“We are calling on the Irish Government to honour its promise to fundamentally reform the Irish asylum system, in line with recommendations in the McMahon Report, and to intensify efforts to bring the 4,000 persons in need of protection to Ireland as part of the Irish Refugee Protection Programme.”

Edel McGinley, Director of Migrant Rights Centre Ireland said it was “disappointing and disheartening” that the Ireland has resettled just 100 people so far this year, and plan to resettle only 20 or 30 more.

“To put this in perspective, Lebanon, a country half the size of Munster, currently hosts 1.2 million refugees from Syria, and the Greek islands in October 2015 received 56,000 people in one week alone,” states the report.

The coalition of organisations working with asylum seekers, migrants and refugees in Ireland expressed dismay that at a domestic level, most of the 173 recommendations made by the Government’s Working Group on the Protection Process in June 2015 have yet to be acted upon, impacting on Ireland’s ability to deliver a fair and functional asylum system in line with international obligations. 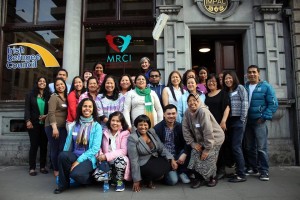 The report noted that since May 2015, LÉ Niamh and LÉ Samuel Beckett of the Irish Naval service have rescued over 7,300 people in operations in the Mediterranean.

It stated that while the Government committed to receiving 4,000 people through the Irish Refugee Protection Programme, it also stated that up to 20,000 people could potentially come to Ireland through family reunification.

According to the report, systemic barriers make this impossible in reality.

Launching the report on Monday (7 December) the *NGO coalition expressed disappointment that the focus by EU leaders on border security has diverted attention from the urgent need to find political solutions to current crises.

The coalition warned that there will not be a military solution to the current conflicts and EU Member States must put real pressure on all parties in the Middle East to engage in inclusive peace talks immediately.

“Despite several high-level commitments, the situation for desperate people has worsened. Harsh winter conditions have increased the danger faced by people attempting to flee overland and by sea. We have reports from our partners of small children suffering from trench foot in camps within the EU because of the inadequate response of our leaders,” said Jim Clarken of Oxfam Ireland.

“On entering Europe, people are now being met with police brutality, dogs and barbed wire. This cannot continue.”

The report makes recommendations to the Irish Government to:
. Enable family reunification without systematic barriers to refugees’ resettlement in Ireland;
. Encourage EU partners to introduce humanitarian visas and allow access to EU at embassies and consulates;
. Ensure that the EU does not use development aid to curb migration or increase border security;
. End ‘for profit’ provision of accommodation for asylum seekers;
. Establish a Special Rapporteur on Refugees, Asylum Seekers and Statelessness for Ireland and local integration groups;
. Maintain naval rescue missions throughout the winter;
. Call for the action to alleviate pressure on states at the border of Europe;

The number of people displaced around the world is at its highest since the Second World War at 59.53 million people, an increase of 8.3 million since 2014.

Globally, one in every 122 people is now either a refugee, internally displaced, or seeking asylum. Since early 2011, the primary reason for this acceleration has been the war in Syria.