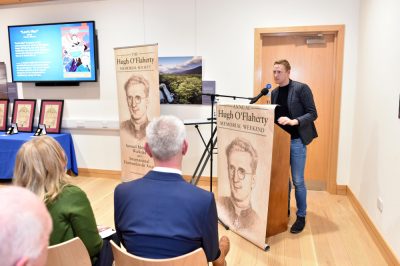 Former ‘mon’ boy, Colm Gooch Cooper launches Leo’s War with the writer Patricia Murphy in Killarney House. The novel for young readers is based on the true story of one of Killarney’s most inspirational heroes, Monsignor Hugh O’Flaherty, aka the Vatican Pimpernel, who went to school in ‘the Mon’ before becoming a priest and ending up a World War II hero. Photo: Don MacMonagle.

Speaking at the Killarney launch of Patricia Murphy’s new novel for young readers Leo’s War, the footballer described the Kerry prelate as an “incredible hero”.

During World War II, Mgr Hugh O’Flaherty (1898–1963) was responsible for setting up and running the now famous ‘Rome Escape Line’, through which he gave refuge to over 6,500 people being hunted by the Gestapo.

The Irish priest, who was a senior member of the Roman curia, is considered to be one of the most significant figures in Catholic resistance to Nazism.

His ability to evade the traps set by the German Gestapo and Sicherheitsdienst (SD) earned Mgr O’Flaherty the nickname ‘the Scarlet Pimpernel of the Vatican’.

This latest novel from best-selling author Patricia Murphy is based on the true story of the inspirational Killarney hero.

In his address for the book’s launch, Colm ‘Gooch’ Cooper said that, “Like most people of my age in Killarney, I knew nothing of this great man and his humanitarian work during the war in Rome.”

But since the setting up of the Hugh O’Flaherty Memorial Society and the publication of various books including Leo’s War, he had got to learn more about “this incredible hero”, whom he described as “this ordinary Killarney ‘Mon boy’ who attended the same school as I did, but went on to do extraordinary things in the service of others”.

Patricia Murphy’s new work is her latest novel under the ‘Hands on History for Young Readers’ published by Poolbeg Press. It includes the best-selling ‘Molly’s Diary’, which is based around the 1916 Rising.

Speaking at the launch, Patricia Murphy said she was “delighted to include the Monsignor O’Flaherty story in my latest novel and to see in the local O’Flaherty Schools Literary Competition that such young students are readily applying the Monsignor’s humanitarian principles to today’s world circumstances”.

Colm Cooper admitted that while most of his out-of-school time was taken up with kicking football and other sporting activities, he regretted not making more time for looking at the history of his homeplace and the great characters and real-life heroes that came from his town and in particular his school, the Mon.

Jerry O’Grady of the Hugh O’Flaherty Memorial society said after the launch, “Children love history – when it is presented in language they can relate to and with a fun and/or mystery element in the story.”

He said Patricia Murphy’s ‘Hands on History’ series delivered this in spades.

“She did it wonderfully in her earlier best seller Molly’s Diary, which dealt with the Easter Rising. In Leo’s War, the brave deeds of Monsignor Hugh and the risks he and others took in Nazi occupied Rome are knitted into a children’s adventure story – with the facts made more appealing to the young reader by the inclusion of an appropriate level of fiction.”

He added that at a time when some are questioning the value of history in the school curriculum, “we need more than ever to make our young people aware of the inspirational work of real-life heroes like Hugh O’Flaherty – and if this means enhancing the story by the addition of some imaginative fiction, than that is what we should be doing. 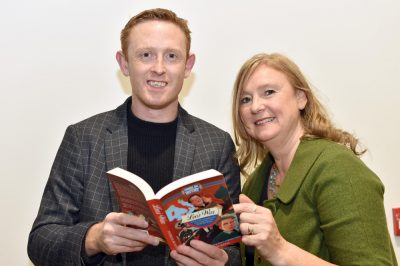 Colm Gooch Cooper launches Leo’s War with the writer Patricia Murphy in Killarney House this week. The novel for young readers is based on the true story of one of Killarney’s most inspirational heroes, Monsignor Hugh O’Flaherty, a.k.a. the Vatican Pimpernel. Photo: Don MacMonagle.

“Over the last three years in the annual O’Flaherty Primary School Essay Competition, we have been delighted to see the way that 12-year olds in our national schools are able to apply the Monsignor’s principles to today’s world circumstances. It greatly encourages us to continue our outreach to the schools.”

Since 2017, all the schools in the Killarney Parish have been including a Hugh O’Flaherty Day in their calendar of events.

The Memorial Society has provided all the schools with a comprehensive resource pack.

The schools have also generated a bursary, which is presented to the recipient of the annual Hugh O’Flaherty Award.

This year, the bursary was shared between Kerry Mountain Rescue, the RNLI and Killarney Water Rescue. It will help these organisations to pay for equipment.

The Killarney launch of the new novel took place as part of the 2018 Hugh O’Flaherty Memorial Weekend, which is supported by Killarney Chamber of Tourism and Commerce and Kerry County Council Community Support Fund.