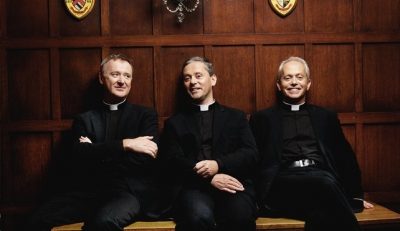 It is believed to be the largest number of Irish Catholic clergymen to be named in a single honours’ list. Indeed, this may be the first time that four priests from the same diocese have won an award in the UK’s biannual honours.

Three of the award winners belong to The Priests, the successful classical singing ensemble, formed by brothers Fr Eugene and Martin O’Hagan, from Claudy, Co Derry, and Fr David Delargy, from Balymena, Co. Antrim. The three Down and Connor priests say they are privileged to be able to receive an MBE each “for services to music and charity”.

“The gift of music and vocal training has been nurtured in each of us from an early age,” said Fr Eugene, speaking for the trio. “Our unexpected journey over the past eleven years has been an epic one and has brought us to places we could only ever have dreamed about. We have met wonderful people of every creed and philosophy. We would like to thank all those who have supported us in this journey, not least our families, fellow clergy, religious and lay faithful of the parishes in which we have served and continue to serve. We thank our Bishops who have been of particular support.”

The group’s first album, The Priests (2008) was named by Guinness World Records as the UK’s fastest selling debut album for a classical act and it went Platinum in Ireland (x7), the UK, Sweden, and Norway while going gold in New Zealand, Canada and Spain. Since then they have released two more albums and they have toured in Europe, Canada and the United States. Monies raised by these activities are donated to charity.

Fr Eugene said: “Thanks to people’s generous support The Priests Charitable Trust has been able to assist several charitable causes and, as long as we sing, will continue to do so.”

The fourth Down and Connor priest named in the honours list is Fr Stephen McBrearty. He has been awarded an MBE for “services to criminal justice”, as a result of his role as the lead prison chaplain serving in Northern Ireland.

The parish priest of Hollywood, Co. Down, said he was humbled and delighted to receive the award which recognises the work of the entire prison chaplaincy in Northern Ireland and he paid a personal tribute to all “the extraordinary chaplains from all Christian denominations and other faiths, who untiringly give their service to the Prison Parish family”.

“Throughout the history of the Northern Ireland Prison Service, chaplains have been appointed to spiritually and pastorally accompany those placed into their care and those they work alongside,” Fr. McBrearty said. “In their ministry, chaplains bring an awareness of the need for prisoners to be reconciled and resettled into the community within which much pain and suffering has been caused by their actions.”

The fifth Northern Irish priest to receive an honour is Fr Kevin Mullan, PP of Drumquin in Co. Tyrone, who was awarded a British Empire Medal “for services to Inter-Church Collaboration”. Fr Mullan is known widely for his role in comforting those bereaved in the 1998 Omagh bombing. He has also worked on many cross-community initiatives in Co. Tyrone, such as the Omagh Community Youth Choir. However, it was thirty-five years ago that he first rose to public prominence with a simple gesture. He literally crossed the road in Limavaady to shake the hand of his Presbyterian counterpart, the Rev David Armstrong. Together the two men worked on initiatives such as the Ulster Project, which seeks to empower young people in “following Christ as committed peace builders, fostering understanding and acceptance, working together to build community”.