Home > Featured > Golden jubilee for Church of the Guardian Angels

One of Dublin’s largest churches, the Church of the Guardian Angels on Newtownpark Avenue in Blackrock, is celebrating its Golden Jubilee.

In common with many of the Dublin suburbs, an explosion in housing in the Newtownpark area meant that the existing parish, St John the Baptist is Blackrock, could not adequately serve the area’s growing population.  The existing parish was divided and a new parish church and primary school were built on land donated by the Daughters of Charity with the new place of worship being solemnly blessed and opened by Archbishop John Charles McQuaid on 5th November 1967.

Notably, it is the only church in Ireland dedicated to the Guardian Angels.  Such is its size, for many years it was the venue for the Annual Mass of the St Joseph’s Young Priests Society, because the church could comfortably accommodate all those attending.

Designed by the architect Charles Ellison, the building is strikingly modern, and its construction uses a reinforced concrete frame that is capped by a copper roof. The spacious interior is brightly lit by natural light during the day with the stained glass windows that run along the sides of the church providing a wonderful display of colour. 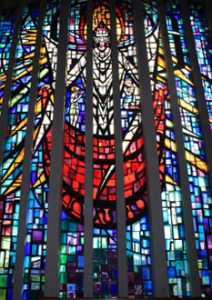 The current Archbishop of Dublin Dr Diarmuid Martin, visited Newtownpark Avenue on Sunday for a Mass of Thanksgiving, and he recalled that when the Church of the Guardian Angels was being blessed he was coming towards the end of his time as a seminarian in Clonliffe College.

“This Church of the Guardian Angels was built to respond to changing demographics in this area,” the Archbishop told the congregation.  “Very soon after its completion, the arrangement of the altar was changed to conform to the new liturgical culture of Vatican II. Over the past 50 years, the building has seen continuous change and adaptation. Most recently, the Gathering Space and Baptismal Font were introduced and a ‘Stay and Pray’ space was created. The future foresees a Parish Pastoral Centre to respond to the new needs of faith formation and education.”

“A Church that does not respond to changing situations is failing in its mission. A Church Jubilee and anniversary that simply looks back to the past – no matter how justified – is a church that is gridlocked in its vision. An anniversary must be a moment of looking forward and planning to take up the best of the past and integrate it into a vision of the future. That vision must be one which opens out to younger generations and gives them a sense of being welcome in the Church community and which challengingly offers them for their lives the vision of Jesus Christ.”

Praying that the parish church will continue to be a place where ‘community built around the altar of the Lord is formed’, the Archbishop said,  “These are changing and challenging times, but just as 1967 was a good time to be a seminarian, 2017 is a great time to be a believer in Jesus Christ. We give thanks to God for all those who have served and ministered in this Church over the past 50 years and for the many who by the way they lived their lives, have quietly shown us what Christian life is about.”