Home > Featured > “God is really present on our streets this Christmas, but do we recognise him?”

“God is really present on our streets this Christmas, but do we recognise him?” 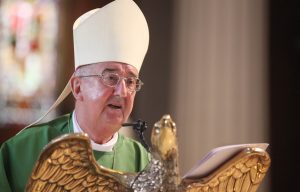 Modern Ireland has an identity crisis about how it wishes to understand Christmas, Archbishop Diarmuid Martin of Dublin said in his Christmas homily at St Mary’s Pro Cathedral.

He recalled a recent Dublin newspaper article that referred to a nation yearning for meaning at Christmas and which noted that 86 per cent of Irish people questioned in a survey believe that Christmas, the celebration of the birth of Christ, has become too commercial.

The piece also found that the amount spent commercially this Christmas has gone way beyond previous years.

However, Dr Martin stressed that this was not the “complete picture” and that alongside all the commercialisation, “Christmas is a time for great generosity. It is a time that brings out the best in us. Families come together. The lonely are remembered.”

He added that paradoxically much of what is now celebrated commercially draws heavily from elements that are inherited from the Christian tradition.

“The Christian idea of the celebration of the birth of Christ was never just about what happens in Church, what is beautifully celebrated in carol services or liturgies like ours this evening.

“Christmas was always also about a vision of human relations in which people care and share, in which people rejoice in the experience of goodness, in which people gather and unite, in which children celebrate simple joys. The fundamentals of what Christmas really means were never just created in Hollywood. They have deeper roots that still endure.”

Then there were practising Christians who will betray the real Christmas by the way they live.

“The Church as an institution hosts wonderful charitable organisations that really blossom at Christmas, yet it also hides within its history a shameful failure to protect children and the vulnerable,” Archbishop Martin acknowledged.

“The God of love is present reminding us to be there where men, women and children of our times become excluded and marginalised. God is present at Christmas in the measure in which we reach out to those whom our society fails to provide with the experience love. Despite our affluence, our cities conceal the faces of many who are left feeling that they do not belong.”

Referring to the daily stories about homelessness, immigration, poor education and inadequate healthcare “as problems that scar our society”, he said the Christmas message must draw us beyond just discussing concepts and spinning statistics, towards encountering people.

“We are talking about people who stand this night on the edges of our streets and housing estates. They are part of our urban landscape. We know that they are there, but do we really know them personally?

“God is present with them. God is present to us through them. We meet God in them. Yes, God is really present on our streets this Christmas, but do we recognise him?”

He continued, “do the marginalised recognise Jesus in us? Do we as believers witness to others that our God, the Wonder Counsellor, Mighty God, Eternal Father and Prince of Peace appears in all humility and challenges us to reach out to the humble?”