The five years of brutal war which has devastated people, society and culture in Syria was highlighted at this year’s Bloom garden festival in Dublin’s Phoenix Park last weekend.

GOAL teamed up with Irish landscape designer, Brian Burke, winner of last year’s RTE ‘SuperGarden’ show to create a garden that would represent Syria’s past, present and its future.

“I was prompted to help build a garden for Syrian refugees after I saw harrowing television footage of displaced, frightened, maimed and sometimes dead children,” said Brian Burke.

He was already building a reflective space for Syrians beside the refugee reception centre at the Hazel Hotel in Monasterevin, Co Kildare.

The idea for this garden came after consultation with Kildare Volunteer Centre (KVC) members who are helping refugees settle on their initial arrival into Ireland.

“The reaction of the public to the GOAL garden has been hugely positive,” said GOAL CEO, Barry Andrews.

“They understood the ‘war and peace’ concept behind the garden, and appreciated how it was helping to shine a light on a conflict that is still raging. Most of all, they were delighted to hear that the garden will serve a very real and significant purpose once it is rebuilt in its new home in Kildare.”

GOAL programmes reach more than one million Syrians inside the country, and many refugees in Turkey, and GOAL staff numbers include 500 Syrian themselves.

The first represents Syria’s glorious past; the second looks to its future. Both of these main sections show Syria at peace.

They use plants typical to the region, patterned paving and a central water-feature which illustrate why Syrian gardens are so distinctive and that they function best a time of tranquillity and harmony.

These two peacetime sections are forced apart by a half-metre wide ribbon that runs diagonally from one corner of the garden to the other.

This ribbon represents Syria today, a land that has been victim to more than five years of war, instability and abandonment.

A handful of personal items placed along this strip will suggest that the garden once belonged to a family that were forced to leave their home in a hurry. 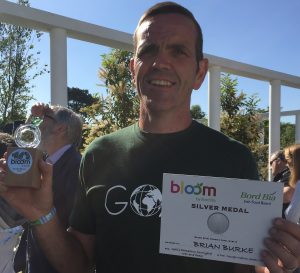 Designer Brian Burke, who won a silver medal for his efforts, hopes to have the garden fully functioning at the refugee centre and ready for Syrians to enjoy and maintain by mid-July.

Four Syrian refugees from the centre visited the garden during Bloom and were hugely impressed.

“The garden will provide the Syrian residents at the centre with a place of relaxation and reflection,” explained Brian Burke.

“I am delighted that the garden received such a warm reaction from the public, the refugees, the President and the Taoiseach, and I hope it will continue to provide a measure of comfort to Ireland’s Syrian community in the coming months and years.”

Like the garden at Bloom, the garden at the centre will feature planting typical to the region, patterned paving and a central water-feature.

Unlike the Bloom version of the garden, there will be no ‘war’ element to the garden at the refugee centre.

“The war element was something we felt we should include in the garden (at Bloom) to remind people generally that the war continues,” said Barry Andrews.

It also fitted in with GOAL’s ‘Now You Know’ advocacy campaign launched last year in an effort to highlight the humanitarian situation that millions of Syrians continue to find themselves in at home and abroad.

The Bloom garden has played an important role in getting that message across to the public.