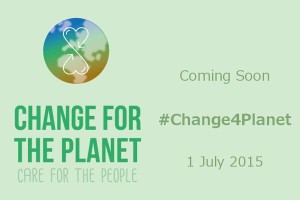 Trócaire has joined 16 other groups in a new Catholic campaign for sustainable lifestyles following the release of the Pope’s encyclical Laudato Si.

CIDSE, the international alliance of 17 Catholic development organisations from Europe and North America, yesterday (1 July 2015) launched a three year campaign: ‘Change for the Planet – Care for the People.’

Trócaire is taking the campaign to the Irish Government and has invited people to join what it calls “a mass photo stunt” on Sandymount Strand in Dublin on Saturday to call on the Government to stop burying their heads in the sand and start tackling climate change now.

Those participating will actually bury their head in the sand.

“Bring your buckets, spades, family and friends and help us to get the message out that the time for action is now. We can’t leave it to future generations to clean up our mess,” stated Trócaire.

“In five months a meeting in Paris will see world leaders agree to a new global deal on climate change. So far its looks like this deal will not be enough to secure a safe future for people or the planet. It’s time the Government got their heads out of the sand.” 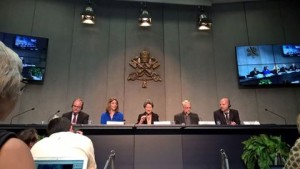 This is the first of many events over the coming months calling for urgent action on climate change.

The “Change for the Planet – Care for the People” campaign was launched with Bernd Nilles, CIDSE’s Secretary General.

“CIDSE and its members call for policy changes and sustainable lifestyle choices,” he said.

“We believe that collective and individual changes are crucial to respond to the urgency we face through climate change, environmental degradation and the consequence they have on people’s lives.”

The campaign links Catholic development work for social justice with the promotion of sustainable living.

CIDSE quoted Pope Francis’ encyclical Laudato Si which states, “Every effort to protect and improve our world entails profound changes in lifestyles, models of production and consumption, and the established structures of power which today govern societies”.

The campaign aims to contribute to these changes. As Pope Francis puts it, “a change in lifestyle could bring healthy pressure to bear on those who wield political, economic and social power”.

The campaign will focus over the next three years on energy and food consumption, by calling for better policies as well as on everybody to do their share.

Through social media, workshops and events it will encourage people to contribute by:
– cutting their energy usage
– buying local and sustainably produced food
– placing priority on taking public transport
– and eating less meat.

These are some of the examples of daily practices that count. Several successful models of sustainable living already exist around the world, and the campaign will also be a platform for them, and will further connect people and mobilise the Catholic movement. 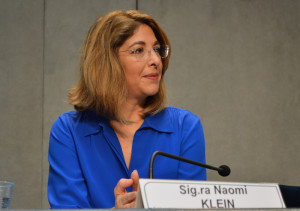 Anti-capitalism activist Naomi Klein, praised Pope Francis for standing up to Republicans who are warring against environmentalists, on July 1, 2015, at the Vatican. Religion News Service photo by Rosie Scammell

CIDSE stated that in 2015 it especially looks to the UN Climate summit in Paris – COP21 (30 November – 12 December) as the key political opportunity to call for a fair global deal for people and planet.

Separately, the author of the bestselling book ‘No Logo’ has admitted she was surprised and moved to be invited to the Vatican to speak about ways of mobilising public opinion and putting pressure on political leaders.

Speaking about the Pope’s encyclical, Naomi Klein described it as “a poetic” document but she also said it was a “courageous and common sense document that speaks not just to the Catholic world, but for every person living on this planet”.

Speaking at a press conference ahead of the two day ‘People and Planet First: the Imperative to Change Course’ which opens today, Naomi Klein said the encyclical forcefully confronts the fact that our unbridled models of development and technological progress have unleashed “natural forces that are far more powerful than even our most ingenious machines”, yet many are still in denial about the path of environmental destruction we’re headed down.

Even critics who accept the document’s moral authority and scientific data, she said, insist the Pope should leave the economic policy to the experts.

“I forcefully disagree. The truth is we have arrived at this dangerous place partly because many of those economic experts have failed us, wielding their powerful technocratic skills without wisdom. They produced models that placed scandalously little value on human life, particularly on the lives of the poor, and placed outsized value on protecting corporate profits and economic growth.”