Global Rosary Relay for Priests to be held in 50 countries 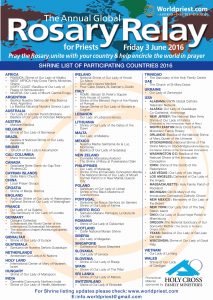 The Annual Global Rosary Relay for Priests takes place next week in over 100 locations across some 50 countries.

On the stroke of midnight on 3 June, the biggest-ever prayer relay will start, continuing all around the world for a full twenty-four hours, beginning in Siberia and ending in Guatemala.

The 7th Annual Global Rosary Relay for Priests will take place on the feast of the Sacred Heart, as it has done in the past.

The World Priest group has been working hard to ensure that the event will involve millions of the laity along with their priests.

According to organiser, Marion Mulhall, “Its purpose is clear – to pray for the sanctification of the priests who serve the needs of humanity on a daily basis.”

In a statement, she said what makes this year different is the extent of local involvement.

The World Priest founder continued, “There is a significant trend now for things to intensify on a local level, as people find ways to increase participation. In a way you could say that the Annual Global Rosary Relay for Priests goes local.”

This is the second year that Archbishop Oscar Julio Vian is leading his people in prayer in Guatemala, Central America.

Last year, commenting on the Rosary Relay, he stated that “Guatemala could be the opening door for this event to spread within Central America and the rest of Latin America.”

In the Caribbean, a new shrine is participating at La Gruta de Lourdes at Trujillo Alto as is the shrine at Basilica Svaty Hostyn in the Czech Republic.

The Children’s Rosary prayer group movement will also participate again this year, with groups from some twelve countries either attending local shrines or joining the event in their homes, where children will pray with their parents and friends.

A number of television broadcasts of the venture will be relayed via EWTN, the global Catholic network.

Events will also be broadcast on national television by TelevizeNoe in the Czech Republic and Televisión Arquidiocesana in Guatemala.

If you have any questions about this unique prayer event in your area or if you want to see the full list of participating shrines visit www.worldpriest.com