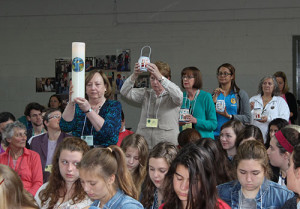 Mother McAuley was a feminist icon, and the internet can be used to spread her message, more than 100 young people heard last week.

They came from all over the world to attend the third Biennial Young Mercy Leaders’ Pilgrimage for Secondary School Students which took place in Dublin.

Jeremy D. Dickey attended previously in 2011 as a participant, but this time as Marketing Specialist for the Sisters of Mercy of the Americas, he did a presentation ‘Connected Globally through Mercy’.

He surprised the young people present when he invited them not only to keep their mobile/smart/iPhones on, but to take them out and hold them in their hands.

“I had an amazing time back in 2011 at my first young mercy leaders’ pilgrimage. It was a great experience, I was really steeped in ‘mercy’, and it was a great opportunity to be there,” he said. 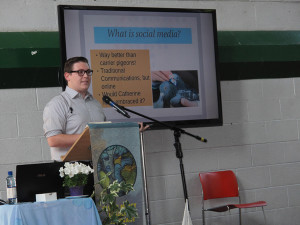 He outlined how social media can be used as a tool for promoting justice.

However, he cautioned the group to be responsible and respectful.

With some volunteers he demonstrated how messages can get distorted when a message/tweet is passed along from one person to another.

They participated in a mix of prayer, ritual, and workshops.

During the opening ritual, a student from each country led the group in prayer and this was followed by a Native American blessing which called for all: “….to stand tall in the sunlight….to be aware of the needs of others….to believe in the wonder of life…the miracle of creation….and the dignity of the human being.”

Áine Barrins, rsm, Congregation of the Sisters of Mercy Ireland, spoke on the life and achievements of Venerable Catherine McAuley who donated her entire inheritance to improve the quality of life for the poor and downcast in society.

Ailsa Mackinnon, rsm, Sisters of Mercy of Australia and Papua New Guinea, in her presentation – “No boots and plenty of walking” described the incredible work being done by Mercy Works in Australia, Papua New Guinea and Timor Leste.

Mercy Works is a development organisation which assists the needy in these countries.

Ben O’Brien who had travelled from Australia for the event said he liked this talk. “(It is) so impressive how much they give,” he said. “The talk has really motivated me to continue the days of mercy with the people I meet.”

Ruth Kilcullen, who is Campaign Manager for MECPATHS (Mercy Efforts to Counter Child Prostitution and Trafficking in the Hospitality Sector) spoke on the issue of sex trafficking and MECPATH’s emphasis on human rights underpinned by Gospel values.

After the meeting she said, “For me Catherine McCauley was a real icon, a feminist icon, in the way she challenged the status quo of her time and she prioritised supporting vulnerable women and girls. For us, we must continue to challenge the status quo that perpetuates demand for victims of trafficking.”

Aine O’Connor rsm, Mercy Global Action Coordinator at the United Nations, in her workshops looked at the root causes of poverty and distinguished between charity and justice – with Venerable Catherine McAuley as a model.

Denise Boyle fmdm introduced Young Mercy Leaders to how MIA/Global Action is addressing the issue of modern slavery at local and global levels and the role of the UN in naming and shaming nations that abuse human rights.

She also highlighted the work of Mercy International in the areas of eco-justice and climate change. 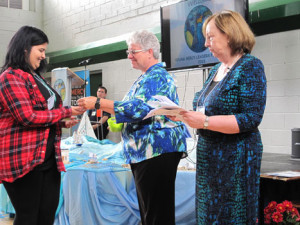 In his homily he described the events in his life which led to the composing of the song The Clouds’ Veil and the impact this song has made on many people who have experienced tragedy or difficulty in their lives – including the families of victims of the 9/11 bombings in New York and the 2009 bush fires in Australia.

The participants came from Mercy secondary schools all over Ireland and from places abroad such as America, Australia and Africa.

Many are already involved in local initiatives to promote Mercy and Justice and others will begin such projects on their return home.