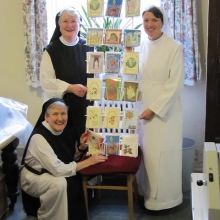 The Cistercian Sisters of Glencairn Abbey availed of their move into a stunning new card-making workshop to launch their new Christmas card catalogue.

The premises where the new workshop is located incorporates a number of old stone archways which were discovered during recent renovation works.

“It is an old building that used to be the stables way back. When they took the plaster off and cleaned it up, they found these beautiful archways. They have restored them and it looks beautiful,” Sr Marie Fahy told CatholicIreland.net.

She added, “I think it will be a very bright space and a brilliant place to work in.”

Card-making is not new to the Sisters at the Abbey.

As part of their rule to “live by the labour of their hands…” the production of religious greeting cards by the card department began back in 1955.

Since then, they produce a variety of greeting cards in Irish and in English for all occasions – Christmas, Easter and St Patrick’s day.

They also design and print memorial and acknowledgement cards or commemorative cards for the deceased in a range of sizes and designs based on customers’ needs. 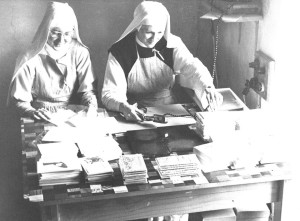 “We always have a catalogue out before Christmas. Our cards are in English and Irish and most of them are designed in-house. They can be bought at the front door or through the post in packages of six,” said Sr Marie Fahy.

The card-making workshop with its restored arches and new laundry are located in 19th century out-buildings constructed by the previous owners of Glencairn Abbey, near Lismore in Co Waterford.

These buildings face onto a courtyard where the Eucharist bread-making facility is already housed.

There is also a carpentry workshop for one of the Sisters, and an area for another sister for her dried flowers. The lawnmower and other grounds machinery are stored there in a courtyard building too.

“All the work will be in one area around the courtyard. That is a Cistercian tradition where all the workshops are in one yard, you would have had the cobblers shop and the habit-making and all the works, and we are going back to that and reclaiming that part of our tradition,” said Sr Marie Fahy.

The card workshop is expected to be completed before Christmas and the laundry is finished. The buildings for the Eucharist bread department were renovated in 2006.

Fundraising is ongoing and the sisters depend on friends and family who have organised events such as TV chef Nevin Maguire’s cookery demonstration, and Liam Lawton and Noirín Ní Rían’s concert. 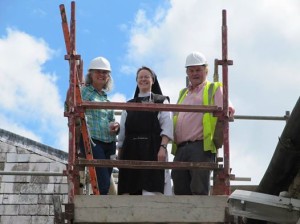 The next fundraiser is in Rockwell College with an Evening of Music and Reflection on Friday (28 November).

The upgrade of existing buildings is to meet the needs of the future.

A number of novices have joined in recent years.

One of the newer sister’s final profession was featured in an RTE documentary ‘School of Love’ which was broadcast on Easter Sunday in April 2014.

It is currently being broadcast in Australia. ABC Compass television showed Part 1 on 23 November and Part 2 will be broadcast next Sunday 30 November at 6:30pm Australian time.

The Christmas Card Catalogue can be obtained by contacting Sr Mairéad at St Mary’s Abbey.