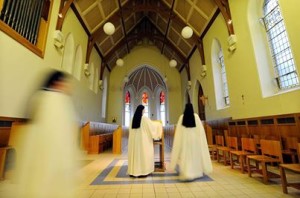 Due to popular demand, the Cistercians in St Mary’s Abbey in Glencairn have had to organise a second monastic experience weekend within a matter of weeks.

Ireland’s only female Cistercian monastery in Co Waterford was the subject of a Would you Believe documentary aired at Easter and their subsequent vocations event was fully subscribed.

“Eight women joined us for a great weekend on 16 – 18 May and we thank each one for the gift of their presence with us,” Sr Sarah, Vocations Director, said.

“These weekends are a special time for those participating and for the Sisters: we come together to seek God’s will in our lives and to learn from the great monastic heritage that is ours in the Cistercian Way.”

Sr Sarah continued, “Monastic life is an ancient tradition of living for God alone through our liturgy, contemplative prayer, work and community life.”

She added that the Abbess and community remember in their prayers all those who are discerning their vocation to the religious life and the priesthood at this time.

Those interested in exploring if God may be calling them to monastic life may visit the Abbey and stay at the guesthouse, meet with the vocations director, and find out more about Cistercian life.

But another monastic experience weekend is taking place from 29 – 31 August 2014 due to interest among women who would like to discern their vocation.

These weekends are aimed at women aged 22 – 40 in order to give them an experience of monastic life alongside the community at Glencairn.

The participants live the daily monastic rhythm of prayer and praise, monastic work, Lectio Divina, and service to each other, in the monastery.

It is also a time for personal reflection, an opportunity to talk with a sister individually and to enjoy a quiet walk through the fields to the river at the abbey.

There is also be introductory input given by a Sister on Cistercian life and spirituality.

Meeting with others who are also open to considering their vocation can offer further valued support on the journey of discernment.

School of Love, RTE’s Would You Believe one-hour documentary on life at Glencairn can now be seen on RTE player or on the Glencarin Abbey website.

The programme focuses in a special way on the early steps in the monastic journey of Angela Finegan, a young Dublin woman who joined in January 2013.

Sr Angela talks about her discernment and call to monastic life and the documentary contains very unique footage of Angela’s receiving the Cistercian habit. 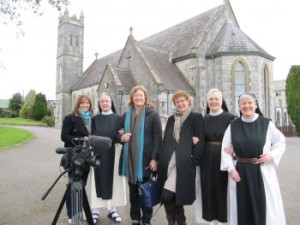 The Cistercians have had a steady intake of vocations over the last few years.

In 2012, they celebrated three solemn professions and one first profession.

In 2013, they welcomed two new postulants into their community in January and more later in the year.

Sr Sarah has attributed the interest partly to the website which was upgraded a few years ago and allows the Sisters to put up fresh news and pictures more frequently.

On it, they try to convey the life that they are leading, and an alive community.

They also try to express the liturgical rhythm of their life through the photographs, and the different seasons of the life. Now with the television documentary there is more interest again.

Sr Sarah estimates that in general up to 10 people a year attend the monastic weekends or live with the Sisters for short periods to discern if they have a vocation.

Typically, they are aged in their late 30s but some people in their 20s also express interest. She feels that the mix of prayer and practical and sometimes manual work attracts them.

The community has 36 sisters from all over Ireland and different parts of the world, with a wide range of age groups represented, from the thirties to the nineties.