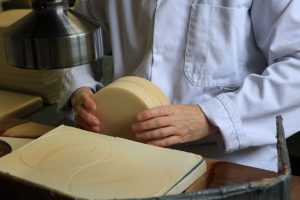 It was never a case of too many cooks at St Mary’s Abbey once they got the order to produce 150,000 Eucharist breads for the World Meeting of Families (WMOF).

The 27 Cistercian sisters each have their own work, but they all gave of their time, as did three lay helpers, to ensure that the breads were baked, cut and packed in time for the WMOF three-day conference at the RDS, Dublin.

Yesterday (7 August) they all gathered to load the van with a scant baker’s dozen of boxes of breads and marked the end of what had been their very own Great Bake Off challenge.

“Now all that remains for us is to pray that the event will be a fruitful one for the Irish Church at this time,” they stated on their Facebook page alongside a video of the occasion. “We pray especially for Pope Francis as he prepares to visit Ireland, that he will be guided by the Holy Spirit to wisely and effectively lead the Church in its renewal and reform.”

Well-wishers left many comments alongside the video of the big send-off on their Facebook page.

“We had to wave them off, having put in all that work,” Sr Fiachra Nutty OCSO told Catholicireland.net. 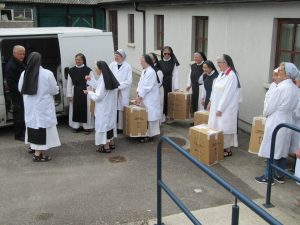 Sisters and colleagues load the van

Back in February, the request came to produce Eucharist breads for the three Masses taking place during the WMOF Congress at the RDS from 21 to 26 August.

The Cistercian sisters, who live in Glencairn, near Lismore in rural Co. Waterford, had previously supplied the Eucharistic Congress in 2012 in Dublin with a donation of brown Eucharist breads.

“They particularly wanted the brown because we supplied it to the Eucharistic Congress,” Sr Fiachra Nutty told Catholicireland.net.

Bishops and cardinals from other countries as well as the organisers of that event were very taken with it she said, explaining: “It is thicker than the average white [Eucharist] bread and therefore it is more the consistency of bread so it ticks all the boxes for Canon Law and Vatican II.”

In March/April the team began the actual baking of the breads, because it requires great attention to detail and skill.

“We normally produce in the region of three million breads per year. One-hundred-and-fifty-thousand in that context is not huge but it does add to our production schedule,” said Sr Fiachra Nutty. “The baking process is tricky enough. We only have two ingredients – water and flour, nothing else. By Canon Law we cannot put in additives of any kind.”

The difficulty is that the flour varies depending on the growth of the grain and so sometimes more gluten develops. Also, the humidity and temperature on any given day vary, so the recipe has to be adjusted accordingly. However, the sisters are helped by the fact that they have an automated baking machine with 12 plates.

When the bread is baked, it is not unlike an A4 sheet. The sisters cut, humidify and place the bread under flattened weight. This is all done by hand, as is the sorting and packing. Normally there is a team of ten involved in this work, with one lay employee and two lay volunteers. 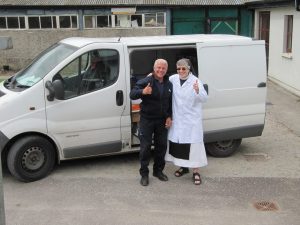 On this occasion, it was all shoulders to the wheel until the order was complete. Now the sisters are looking forward to the WMOF and the visit of Pope Francis. They hope they will be able to make the pilgrimage to the Papal mass. However, they also have two sisters making their Profession in August – one before WMOF and the second afterwards.

“They [professions] are the biggest events at an abbey, like a wedding day,” said Sr Fiachra Nutty. “They are calculated according to the date that the sisters entered, so it is not something that we could move. It is fantastic that we have two people committing the rest of their lives.”

In September there is a new person entering the abbey and another may join after that.

The sisters do three types of work at the abbey – farm work, card making and Eucharist breadmaking. The Glencarin Eucharist Bread business started in 1981 as an alternative for sisters who could not do the physical work involved on the dairy farm that was there at the time.

An extension was built in 2005 with some funding from Waterford Leader Partnership Ltd. In 2007 the fully automated baking machine arrived and allowed increased production. In 2011 humidifying and cutting rooms were upgraded. The business supplies cathedrals, parishes, nursing homes, religious houses, hospitals and educational institutions throughout Ireland, the UK and further afield.