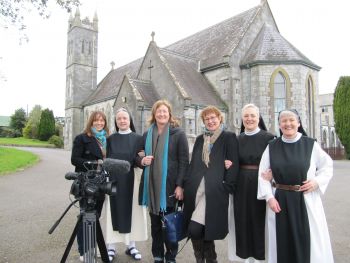 On Easter Sunday, RTÉ TV’s Would You Believe programme will feature Ireland’s only female Cistercian monastery.

Over the course of a year, the programme team spent time behind the scenes documenting the lives of the nuns who follow St Benedict’s 6th century way of life in silence, solitude and prayer.

The Cistercian abbey and farm are set in rural Co Waterford in the stunning Blackwater valley.

The daily life lived by the community of nuns is similar, beginning at 3.45am to sing together the praises of the Lord.

However, individually, the nuns come from diverse backgrounds; one is a former banker, another an IT specialist, another a radio producer, while two other Sisters were formally a farmer and a midwife.

Now the nuns work together as a community, running a number of businesses: communion host production, greetings card printing, farming and cleaning, and maintaining and restoring their large and demanding collection of buildings.

Prayer is central to everything and the earliest prayers at around 3am are offered in a special way for those who wake during the night through fear, sadness or pain. This is just the first of seven prayer ceremonies which end at sunset.

Sr Fiachra, a former horticulturalist, says of the early start, “It is in the darkest hour of the night at 4am that people wake and worry about their troubles. So, that’s why I’m on my feet praying for all the people that are suffering, whatever it is that they are suffering, so that they will feel God’s presence and comfort in that trauma.”

Sr Sarah is director of vocations and runs the Abbey’s website and regular ‘monastic experience weekends.’

Between these weekends and their website, the community has attracted a number of new postulants in recent years.

In fact, the documentary focuses on vocations by following the spiritual journey of Dublin woman, Angela, an IT specialist with qualifications in science and social work, who visited the Abbey for a weekend and ended up staying.

She is thinking of taking her vows and joining the order and some of these life-changing decisions feature in the documentary.

She also has to decide whether to allow the television cameras in for her ‘monastic initiation ceremony,’ in which she receives the veil as a postulant.

You can also watch Would You Believe: School of Love online at: http://www.rte.ie/player/ie/