About that gift – Pope sends explanatory letter regarding relics to Constantinople 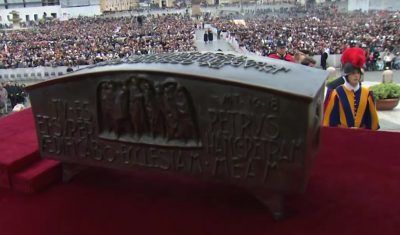 The reliquary before it was presented to the Orthodox Church last June in Rome.

When Pope Francis presented representatives of the Orthodox Church with relics of St Peter in Rome earlier this year, the gesture took many by surprise.

Now, almost as a PS, the Pope has sent a message to the Ecumenical Patriarch of Constantinople, Archbishop Bartholomew, explaining why he presented the nine bone fragments inside a bronze reliquary to his delegation when it visited the Vatican in June.

These nine relics are part of a collection of 19 bone fragments excavated in 1952 from St Peter’s reputed burial place which lies beneath the enormous basilica completed in 1962.

While St Peter founded the Catholic Apostolic Church in Rome, his brother St Andrew founded what became the Orthodox Church in Constantinople.

There was great surprise and joy within the Orthodox Church at the suggestion that St Peter’s relics be placed alongside the relics of St Andrew and venerated in what is known today as Istanbul.

The Pope was inspired to make the offering while reflecting on “our mutual determination to advance together towards full communion”. In doing so, he thought of a gift given by Patriarch Athenagoras to Pope Paul VI more than 50 years ago, an icon of “departing brothers Peter and Andrew embracing, united in faith and in love of their common Lord”.

Today that icon is displayed at the offices of the Pontifical Council for Promoting Christian Unity. Pope Francis wrote: “It is for us a prophetic sign of the restoration of that visible communion between our Churches to which we aspire and for which we fervently pray and work.

“This gesture is intended to be a confirmation of the journey that our Churches have made in drawing closer to one another: a journey at times demanding and difficult, yet one accompanied by evident signs of God’s grace.

“Difficulties and disagreements, now and in the future, must not distract us from our duty and responsibility as Christians, and particularly as Pastors of the Church, before God and history.

“The joining of the relics of the two brother Apostles can also serve as a constant reminder and encouragement that, on this continuing journey, our divergences will no longer stand in the way of our common witness and our evangelising mission in the service of a human family that today is tempted to build a purely secular future, a future without God,” Pope Francis wrote.