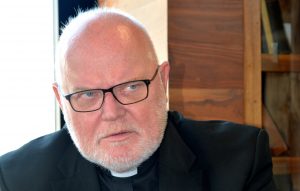 One of Pope Francis’s closest advisers has said the Church must be willing to review mandatory priestly celibacy in response to changing times.

Cardinal Reinhard Marx of Munich and Freising made the comments in his New Year’s homily at the Cathedral of Our Lady in Munich.

Cardinal Marx, who is president of the German Bishops’ Conference and a member of the Pope’s C9 group of advisers, said such review was necessary “in light of the failure” exposed by the clerical sexual abuse crisis.

The German Bishops’ Conference is preparing to debate the issue of priestly celibacy at a workshop during its permanent council meeting next spring. The bishops have said the workshop is a direct response to the clerical abuse crisis in the Church.

“I believe the hour has come to deeply commit ourselves to open the way of the Church to renewal and reform,” Cardinal Marx said, according to a text of his homily posted on the Munich archdiocesan website and reported by CNS.

“Evolution in society and historical demands have made tasks and urgent need for renewal clear to see.”

The Cardinal said that current measures to address sexual abuse in the Church were not enough without adapting Church teachings.

“Yes, matters are about development and improvement and prevention and independent reviews — but more is also demanded,” he said.

“I am certain that the great renewal impulse of the Second Vatican Council is not being truly led forward and understood in its depth. We must further work on that. Further adaptations of Church teachings are required.”

Last November, the lay Central Committee of German Catholics voted by a large majority to abolish mandatory celibacy for priests.

The Association of Catholic Priests in Ireland has been urging Irish bishops to discuss mandatory celibacy. The Association has appealed for the ordination of viri probati and for priests who left the priesthood to marry to be brought back into ministry.