Home > Featured > George Floyd’s killing is a sin that cries out to heaven for justice: US bishops

George Floyd’s killing is a sin that cries out to heaven for justice: US bishops 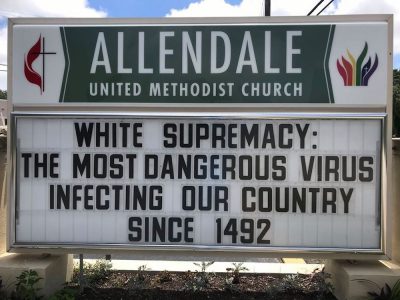 The US Conference of Bishops has described the killing of George Floyd as “senseless and brutal” and “a sin that cries out to heaven for justice”.

In a statement issued on Sunday, Archbishop José H. Gomez of Los Angeles, president of the US Conference of Catholic Bishops (USCCB) said he shared “the outrage of the black community and those who stand with them in Minneapolis, Los Angeles, and across the country”.

The USCCB president stressed, “Racism has been tolerated for far too long in our way of life.”

Referring to the killing of George Floyd, Archbishop Gomez said the cruelty and violence he suffered does not reflect on the majority of good men and women in law enforcement, who carry out their duties with honour.

However, he said the civil authorities need to investigate his killing carefully and make sure those responsible are held accountable.

“We should all understand that the protests we are seeing in our cities reflect the justified frustration and anger of millions of our brothers and sisters who even today experience humiliation, indignity, and unequal opportunity only because of their race or the colour of their skin.”

The leader of the USCCB recalled Rev Martin Luther King Jr’s comment when he described riots as the language of the unheard.

“We need to finally root out the racial injustice that still infects too many areas of American society,” Archbishop Gomez stressed.

But he also warned that the violence of recent nights is “self-destructive and self-defeating. Nothing is gained by violence and so much is lost. Let us keep our eyes on the prize of true and lasting change”.

He added that legitimate protests should not be exploited by persons who have different values and agendas. “Burning and looting communities, ruining the livelihoods of our neighbours, does not advance the cause of racial equality and human dignity,” the Archbishop said.

“We should not let it be said that George Floyd died for no reason. We should honour the sacrifice of his life by removing racism and hate from our hearts and renewing our commitment to fulfil our nation’s sacred promise – to be a beloved community of life, liberty, and equality for all.”

Forty-six-year-old George Floyd died on 25 May after Minneapolis police officer Derek Chauvin knelt on his neck for almost nine minutes, despite the fact that Floyd was handcuffed and lying face down.

Floyd was arrested on suspicion of forgery, relating to the purchase of a packet of cigarettes with a $20 note the shop assistant believed was a counterfeit.

Video footage of the arrest shows Floyd repeatedly saying, “I can’t breathe” as Chauvin knelt on his neck. He then lost consciousness but the police officer continued to kneel on the man’s neck.

George Floyd was later pronounced dead at the hospital to which he was finally taken by ambulance.

The four officers involved in the arrest and death have been fired and criminal charges have been filed against Derek Chauvin of third-degree murder and manslaughter.

Protests in Minneapolis over the killing have sparked protests and rioting across a number of US cities including Los Angeles, Phoenix, Denver, Washington and New York.

Meanwhile, US President Donald Trump has threatened to deploy the US military in cities and states if governors refuse to deploy the National Guard “in sufficient numbers to dominate the streets”.

Mr Trump said he would “deploy the US military and quickly solve the problem for them”. In a call with US governors, the US leader told them “most of you are weak” as he demanded a tougher response to the protests and rioting.

On Monday in a speech in the White House he said, “I am mobilising all available federal resources, civilian and military, to stop the rioting and looting, to end the destruction and arson, and to protect the rights of law-abiding Americans.”

He also visited St John’s Church in Washington which was damaged in an arson attack during protests in a night of unrest in the US capital. At the church, Mr Trump held up a bible and said, “We have a great country. It is coming back strong and will be greater than ever before.”

Separately, the National Black Sisters’ Conference, a group representing black women who belong to Catholic religious orders in the US, compared the present-day killings of African Americans by police to lynchings in the 19th and 20th centuries.

In a statement the group warned, “African American men, women, and children are still being lynched, murdered, and executed for playing with a toy gun, watching television in one’s own home, and mistaken identity, driving or jogging while black, and being choked to death in cold blood by law enforcement officers, who have sworn to serve and protect.”