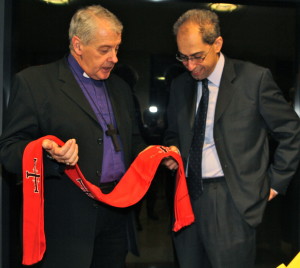 The Church of Ireland Archbishop of Dublin, the Most Revd Dr Michael Jackson with Mr Maher Shuhaibar, who is a cousin of the director of Al Ahli Hospital in Gaza City, Ms Suhaila Tarazi. Mr Shuhaibar was born in Gaza and is a cardiothoracic surgeon in Ireland where he has lived for 26 years. They are examining a stole from the Diocese of Jerusalem which was presented to the Archbishop. (Photo: Lynn Glanville)

The Church of Ireland Primate, Dr Michael Jackson, launched the diocese of Dublin and Glendalough’s Advent Appeal for Gaza on Tuesday.

The ‘Prepare a Place’ appeal is an initiative of the Church of Ireland Diocese Council for Mission, the United Society, the Bishops’ Appeal and the Friends of Sabeel.

It aims to raise €150,000 between now and Christmas for the Al Ahli Hospital in Gaza City.

The funds raised will be used for two projects in Al Ahli Hospital; first of all to improve facilities for on-call staff and secondly to install solar panels to ensure a more secure electricity supply for the hospital.

They are being asked to donate the cost of the meal for their Gaza guest and the price of a gift for a loved one to the appeal.

Speaking to CatholicIreland.net, Archbishop Michael Jackson explained, “It is an initiative which begins in the Church of Ireland dioceses of Dublin and Glendalough and it is open to everybody to participate in it.”

He added, “We are all aware of the human suffering in Gaza and as with our own suffering it is essential that competent and caring people respond to it. That is why, in a simple way, we want to support a hospital which is in Gaza City itself.”

Dr Jackson underlined that was it was deliberately non-political but concerned with a person to person approach to connect people.

“Our concern is to facilitate an enhanced response to human situations which are real. Situations of trauma, disease and situations that need surgery – it is a practical initiative in that way,” he said. 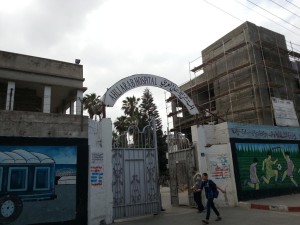 Maher Shuhaibar, who is a cousin of the director of Al Ahli Hospital in Gaza City, Ms Suhaila Tarazi, attended the launch.

Mr Shuhaibar is a Palestinian Orthodox Christian. He was born in Gaza and is a cardiothoracic surgeon in Ireland where he has lived for 26 years. He currently works at the Beacon Hospital and the Mater Private.

“I came here to do the Leaving Cert and studied medicine in Trinity and then did my training in Ireland,” he told CatholicIreland.net. He later obtained a fellowship in US and Germany but returned to Ireland as a consultant.

Asked about the situation his relatives are currently contending with, he said “The situation is dire. You have seen the amount of destruction that has happened there – the humanitarian need is very present.”

Of those in the medical field, he commented, “They are really struggling. To run a functional hospital you need a lot of things that you take for granted here like electricity, a pure water supply, the sterilisation of equipment and having disposable equipment. All of these things have to be imported – so you really need to have an open boarder to let that stuff in.”

He added, “You cannot run a hospital without electricity or a water supply – it is so basic it is below basic.”

While Mr Shuhaibar’s immediate family is here in Ireland, he still has first cousins living in Gaza.

“The last spate of violence was extremely traumatic for them,” he said.

Linda Chambers of the United Society, a mission agency of the Anglican church in Ireland, who is just back from a fact-finding visit to Gaza and the Al Ahli Hospital explained that “There is great need in Gaza both because of the conflict and because people have been injured and are receiving long term treatment.”

Residents in Gaza are still coping with the devastation of the 50-day conflict between Palestine and Israel earlier this year which claimed over 2,000 lives.

Ms Chambers, who grew up in Belfast during the Troubles comented, “I thought I knew what the aftermath of bombings looked like but I wasn’t prepared for the vast extent of the devastation in Gaza – that was shocking.”

She said the appeal is hopefully the start of a three year relationship with the Al Ahli Hospital. If the €150,000 target is met by Christmas, then work can begin straight away at the hospital.

“It will make a real difference to the hospital – particularly the solar panels. So much money is being spent on fuel for generators for the operating theatres and all the other bits of hospital. If we can provide those solar panels, it will free up funds for the hospital to do other things,” she explained.

Linda Chambers explained that there is great need in Gaza both because of conflict and because people who have been injured need long-term treatment.

Psycho-social services are also being provided for children as well as ordinary everyday medical issues.

Surprisingly, the leading cause of death in Gaza is breast cancer and so the hospital is also providing a mamography programme.

It treats those of all faiths and none, though it is a Christian foundation. “It is about solidarity,” Linda Chambers explained.