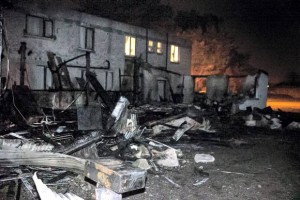 An overnight fire at the Salesian house in the Dublin suburb of Crumlin destroyed the community’s chapel but fortunately no one was injured by the blaze.

Gardaí are investigating the fire which began in the early hours of Thursday morning, while the members of the community were sleeping.

The eleven men, most of whom are over the age of 80, were evacuated from the residential quarters as a number of units of Dublin Fire Brigade battled the blaze.

Salesian spokesman, Fr Pat Egan, told the Irish Independent that the church at the back of house was completely destroyed by the fire.

“I don’t have a clue as to how the fire started. Part of our building was being restored and we were using the church as a storage area,” he told Independent.ie.

According to Fr Egan, the door to the church was locked which meant that the fire was contained. However, the entire church was gutted. “Even the marble altar disintegrated.”

The fire was fully brought under control within seven hours.

Gardaí are still investigating the cause of the fire.