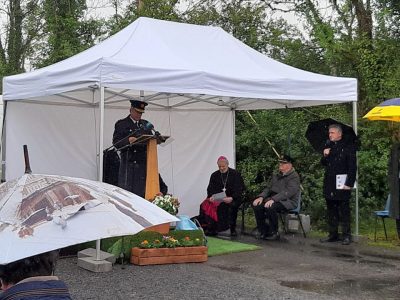 At a service to mark the events of 7 July 1980, Garda Commissioner Drew Harris said the memorial to the two Gardaí served as a reminder of their bravery and courage on that fateful day.

They died at Shannon’s Cross outside Loughglynn after responding to a report of a bank robbery in Ballaghaderreen.

“Their courage and bravery was to protect local communities, their colleagues and the State. Today is a commemoration of that courage. And also of the courage of Henry and John’s colleagues Sergeant Michael O’Malley and Garda Derek O’Kelly who were with them when they intercepted the bank raiders,” Commissioner Harris said.

“Keeping people safe is what Gardaí do every day of the week. But there are times, thankfully relatively rare times, when they put themselves at extraordinary risk in the exercise of their duty. They do so knowing what it means for them. For their family. For their friends and colleagues. That is the definition of courage,” Commissioner Harris said.

In his address, Bishop Kevin Doran of Elphin said that the Garda Siochána, since the inception of the State, “have played a pivotal role in the service of justice and peace, and have done so, for the most part, without resort to arms”.

He highlighted how almost ninety members of the force have given their lives in the course of their active service.

The families of the two slain Gardaí were among those who attended the commemoration on Tuesday afternoon. Both men were from Knock, Co Mayo.

Forty years ago a four-man gang, who were suspected to be members of the INLA, were intercepted after escaping with £35,000 from the Bank of Ireland in Ballaghaderreen following an armed raid, by a Garda patrol car at Shannon’s Cross, Loughglynn.

Following the collision, one of the raiders jumped out of the getaway car and sprayed the patrol car with bullets, killing Garda Henry Byrne. The three other raiders attempted to flee and in an exchange of shots, Detective John Morley was fatally wounded.

Bishop Doran said it was a privilege to be with the families. “Today, as we gather to commemorate Garda Morley and Garda Byrne, it is very important that their families are represented here. John and Henry, like the late Garda Colm Horkan and so many others, were not just anonymous servants of the state. They were much loved sons and brothers, husbands and fathers. They were deeply rooted in the local communities from which they came.”

Dr Doran said that he hoped to express in some way the appreciation and gratitude of the community to the Byrne and Morley families as well as to Commissioner Harris and the members of the Garda Síochána, both serving and retired.

“It is worth reminding ourselves today of the words of Jesus who said: ‘nobody can have greater love than to lay down his life for his friend.’ In many cases, members of the Garda Siochána died to protect or serve people whom they didn’t even know.”

The Bishop of Elphin noted that when people wear a uniform or exercise a public role, their unique humanity can sometimes be obscured by their public profile.

“What are the values and qualities that we most expect to see in members of An Garda Siochána? The ones that come to mind most obviously include: fairness; commitment to the truth; a desire to protect those who are most at risk; the service of the common good; courage; the wisdom to resolve difficult situations in a peaceful manner.”

He added that some of these values are found among the Beatitudes and the Gifts of the Holy Spirit.

He concluded by praying that Garda Henry Byrne and Garda John Morley and all their deceased colleagues rest in peace.