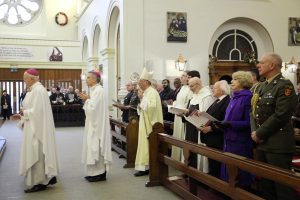 “Non-violence is not a sign of weakness but a sign of being strong,” Archbishop Diarmuid Martin of Dublin has stressed as he expressed concern over the levels of conflict globally and gangland violence closer to home.

In his homily for World Day of Peace in Dublin, at a Mass attended by President Michael D. Higgins, the Papal Nuncio and members of the diplomatic corps, the Archbishop said lasting peace can only be achieved by peaceful means.

Referring to Pope Francis’ message for the 50th World Day of Peace, the theme of which was ‘Nonviolence: A Style of Politics for Peace’, he noted that the Pope had said a politics for peace belongs not just on the global level.

“We need a politics for peace in every country and in every locality. There is no part of the world which is not marked by brokenness.”

Warning that a situation of brokenness will not be resolved by a politics of brokenness, the Archbishop of Dublin said politics must involve a plurality of approaches and cherish difference, but “there must also be an overarching culture of national purpose”.

Urging Irish homes and schools to become the “seedbeds for nonviolence”, the Church leader said young people must learn the call to service from an early age.

He added that they must also learn that divisions can be overcome and that tolerance and respect, patient understanding and mercy, are the strong weapons for relationships that endure, in the personal as well as in the social and political sphere.

However, he also recognised that behind the doors of families there is also often physical violence and sexual violence. 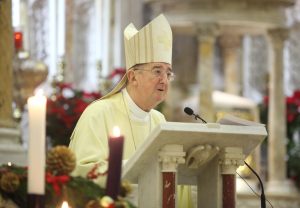 “Some act as if human sexuality is just about personal satisfaction, whereas it is about a love, tenderness and a mutual respect which enriches human relations, and indeed can reflect the loving kindness of our God,” he said.

The upcoming World Meeting of Families which will be held in Dublin in 2018 must place at its centre a renewal of the power of families to be places where love and sharing, peaceful relations and reconciliation can be practised and learnt, the Archbishop suggested.

In his homily, he also spoke about violence on the international scene but said his words also applied directly to the “ongoing situation of violence” in Dublin, a reference to the Kinahan-Hutch feud.

“Violence only leads to retaliation and further grief, and those who seem to think they are stronger by resorting to violence are left in an insecurity [in] which they know no sophisticated modern security systems can really protect them or their loved ones,” he warned. 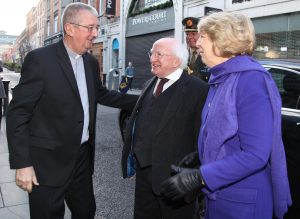 He queried whether those behind the gangland criminality would ever learn or if they are “totally blinded by their own selfish interest in the drug trade, a trade in death which is of such enormous financial interest that its leaders feel that they must kill to keep their power and perhaps, according to news reports, even hire killers from aboard to carry out their evil work”.

Gangland violence must stop, he appealed, but warned that it must not stop in such a way as to strengthen the trade in drugs.

“A truce among drug barons could easily be used to enhance their commerce of death to the further detriment of so many young, innocent and vulnerable young people whose lives are ruined and of their loved ones whose hearts are broken,” the Archbishop warned.

Referring to the wider culture of violence in Ireland manifesting itself in increased stabbings, the Archbishop said he was “saddened” by this as it at times involved very young people.

“What lies behind such foolish violence? Is there a growing anger being built up in the hearts and minds of young people? Is it another form of emptiness and frustration which blinds people to the damage that can be done also to themselves by a moment of folly?” he questioned.