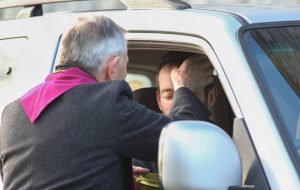 What has been called the first ‘drive-thru’ Ash Wednesday service in Ireland was a big hit, as many turned up to be blessed with ash while seated in their cars.

“People were very appreciative of the service,” a parishioner told CatholicIreland.net. “Schoolchildren availed of it with their parents, and those who were on their way to work. We were blessed with the (sunny) morning,” she said, and added that people were very reverent and respectful.

She estimated that ‘hundreds’ from the parish and neighbouring towns had availed of the service, which she deemed a “tremendous success”.

Ever since Glenamaddy parish decided to make use of its uniquely located church and reach out to people continuously ‘on the go’, it has been headlined as offering a ‘drive-thru’ Ash Wednesday service.

Glenamaddy’s St Patrick’s Church has two gates, enabling parishioners to enter one, receive the blessing and ashes in their car, and progress along the driveway and out the second gate. A Lenten petition box has also been placed outdoors so that busy parishioners can post their petitions without leaving the car. 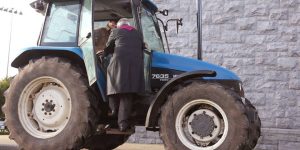 Blessing took place from 8 am to 9.30 am. The Irish Farmers’ Journal photographed a participating farmer in his tractor with trailer attached, no doubt on the way to the mart with cattle. RTÉ News was on hand to report to the nation.

“We thought that because there would not be Mass here in the morning, we could reach out to people going to work and [who] might not be able to come to Mass in the evening, and allow them to receive the ashes,” Fr Paddy Mooney, parish priest of Glenamaddy, told RTÉ.

“It’s not just that they come in and we dab ashes on them; there is a commitment. It is like Jesus who went out to where people were and he gave them an invitation. We are doing the same; we ask people would they like to live a holy Lent,” he explained. 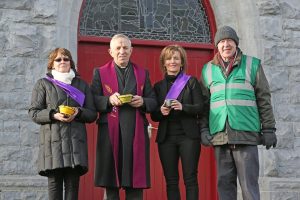 Fr Paddy Mooney and the team

The parish priest and the parish council had discussed how best to celebrate the Lenten season, and to help people participate in the life of their Church when they are under time constraints and the pressures of modern living.

Fr Paddy Mooney told newspapers that people and families are on the move all the time, and the parish community wanted to facilitate them. He said it was an outreach to people where they are at, and likened it to the ‘Mercy on The Mall’ confessions in Shannon Shopping Centre during Advent.

The initiative had the added effect of hitting the national newspaper headlines and radio and TV news, reminding the nation of Ash Wednesday and Lent.

The stone Gothic St Patrick’s Church has been known for its significant stained-glass windows, including the Harry Clarke triple window which was ordered in 1924 and cost £385. No doubt it now has a new claim to fame as Ireland’s ‘drive thru’ church.