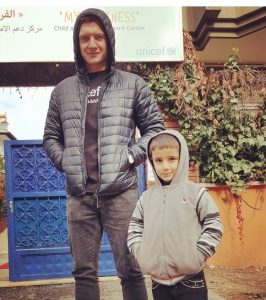 All Star Hurler of the Year Joe Canning will head to Aleppo in Syria on 23 November as part of his role as a UNICEF ambassador.

In a public interview with Dr John Scally, author and Adjunct Assistant Professor in Ecclesiastical History at Trinity College Dublin, Canning described the situation in the war-torn Middle Eastern country as “the worst humanitarian crisis since World War II.”

The conflict has left 250,000 people dead and roughly ten million forced from their homes.

The interview was part of the fourth annual Ethics in Sport conference hosted by TCD’s Department of Religion and Theology.

He said his parents “weren’t too happy” about his going to the war-torn region even though the situation was “quietening down a little bit”.

Though they were “still worried” if he would come back alive, it was “great to help people, the less fortunate, especially kids,” he said.

“UNICEF has people working on the ground in 190 countries. Ambassadors go and see the work that is happening and document it through video and bring it back here and raise awareness among the people of Ireland and raise funds so that we can keep helping people that are less fortunate than ourselves.

“It gives me a good perspective – it makes me feel how lucky I am. When I was there last year I met this family where the nine-year-old son, who has four sisters and a mother, is the man of the house because the husband got killed in the war. Can you imagine a nine-year-old child being the man of the house, going working in a tyre factory to raise money to basically feed his family…;  that is what they are living with over there. That is the reality – we don’t realise how lucky we are.

Canning said his mother and father’s battle with cancer had helped him realise that there were more important things than reading what was written in the paper or looking at what people were saying about you on social media.

“Obviously life is more important. I probably took things for granted a little bit. It is embarrassing to say that it did take the illness of my parents to realise that. I think I have learnt to deal with that kind of thing a little bit better in the last number of years.”

He revealed that Galway’s All Ireland win in September was the squad’s way of commemorating teammate Niall Donohue, who died tragically by suicide in 2013.

Speaking at a conference on ethics and sport, the Galway sports star said his former teammate’s anniversary in October was “tough”.

“You would miss him around training; he was a good character and always one for a laugh.

“You just don’t realise what is going through people’s heads and you are always kind of wondering what you could have done.”

The 29-year-old said coping with Donohue’s loss was difficult because “you don’t really know what to do when you are in a big group of men; it is very hard to know, with different personalities, what way we should react or how we should move forward and try and represent Niall as best we can.”

He highlighted the tightknit nature of the Galway squad, noting that Conor Whelan, who was voted young hurler of the year on Friday night, was a cousin of Niall Donohue’s.

The team kept a flag associated with Donohue with them and it was with them in Croke Park on 3 September when they defeated Waterford to clinch the Liam McCarthy cup for the first time since 1988.

Of his achievement in being named Hurler of the Year, he said it was “great to cap off the year on a personal note” and “really humbling” because he was chosen by his peers.

Former Meath county footballer Colm O’Rourke lashed out at the “unethical” broadcasting deal between the GAA with Sky Sport, which he said forced elderly GAA fans into pubs to see matches.

He also criticised the Gaelic Players Association (GPA) for its emphasis on elitism and warned that the founding ethos of the GAA was changing, with too much focus on money and the takings at the gate in inter-county matches.

Oisín McConville spoke about his addiction to gambling and how he overcame it.