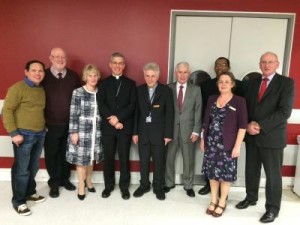 When the Papal Nuncio, Archbishop Charles Brown, celebrated Mass in Beaumont Hospital recently to celebrate the diverse range of ministries there, one of the people he met was former Dublin All-Ireland football hero, Alan Larkin.

For the past 15 years, Alan has been organising the rosters for the Ministers of the Word in Beaumont Hospital, and also in his own parish of Kilmore West.

It’s a ministry he’s been familiar with since his schooldays in the 1960s.

“I remember we were in fifth year in secondary school, and when the change over to the English Mass came in, the Brother just told me and a few others we were doing the readings. He volunteered us!”

He was then in Raheny parish, playing for the local GAA club, and developing the talent which led to an All-Ireland medal in the 1974 final win over Galway.

He subsequently coached at his club, and also managed the Dublin minor and junior teams and Trinity College.

Alan operates a roster of 23 readers for the hospital and 27 in his parish, and is proud to say: “We have an age profile up to 70, but more than a quarter of them are 22 or under. It’s great to get the young people involved.”

Married to Rose, they have five children and three grandchildren.

Alan took early retirement from the Civil Service 25 years ago, but has been working as a life and pensions consultant since.

“When I came to the parish first,” he said, “we had three priests, now we have one, and he is near retirement, so we have to reduce his workload in whatever way we can. We have Mass daily, apart from one day, and at the weekend it’s down to three from five.”