Future Primate pays tribute to the women of Ireland 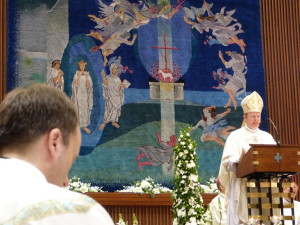 The future Primate of All Ireland paid a warm tribute to the “women of Ireland who witness to love so strongly and so unselfishly.”

In his homily, given to a packed basilica, Archbishop Eamon Martin of Armagh said, “Women especially can teach us how to say ‘yes’ to God who is love.”

The official attendance figure for pilgrims in Knock on Thursday for the Feast of the Assumption, the anointing of the sick and the consecration of Ireland to the Immaculate Heart of Mary was 15,000.

Recalling that Pope John Paul II’s special encyclical on the dignity and vocation of women was issued twenty-five years ago on Thursday, Archbishop Martin said “Let us give thanks for the mothers and grandmothers, the sisters and wives, the consecrated women, the married and single women who have built a ‘civilisation of love’ here in Ireland.”

“The women of Ireland have playe a central role in handing on the faith in this country.  They have been our chief evangelists, the educators and stalwarts of the faith,” the Archbishop said. 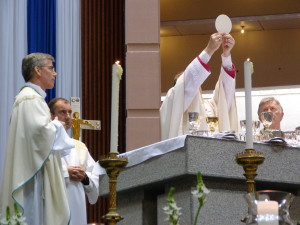 “In many ways their witness to selfless love teaches us men how to be better fathers, brothers, grandfathers, husbands, single men, priests and bishops,” the prelate modestly suggested.

“I thank God especially today for the ‘yes’ that women give to unborn children. Like Mary, they become partners in God’s creation. They unselfishly say ‘yes’ to new life despite all the tiredness and discomfort of pregnancy, the soreness and nausea, the worries and disruption it can bring,” Dr Martin commented.

Recalling Blessed Pope John Paul II’s call to the Irish faithful in 1979 to ‘To transform the world from within’, Archbishop Eamon Martin suggested that Ireland today is perhaps more than ever in need of transformation.

“This dear country of ours, which has proudly sent countless missionaries all around the world to spread the Good News of Jesus Christ, is itself ready for ‘new evangelisation’.”

“Sadly, many of our people are losing touch with Jesus who is the Way, the Truth and the Life, and they are missing out on the joy and the hope that believing in Jesus can bring.” 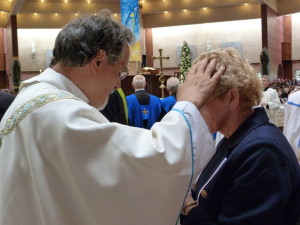 He added, “Our mission, as true disciples of Christ, is to transform Ireland from within. We do this by gently inviting our brothers and sisters to a new friendship with Jesus, and by convincing them, as Pope Benedict put it, that when you let Christ into your life, you ‘lose nothing, nothing, absolutely nothing of what makes life free, beautiful and great’!”

Referring to the special consecration of Ireland to the Immaculate Heart of Mary, Archbishop Martin explained that a consecration such as this “is not something simply done to us, or for us, which asks nothing of us in return.”

“If we travel home from Knock today without a renewed commitment to God’s will in our own lives, then how can we expect this solemn and beautiful Act to make any difference at all?”, he asked. 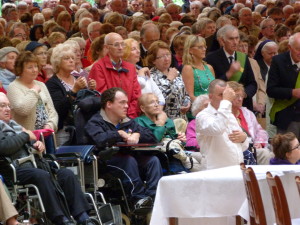 “This entrustment asks for our ‘yes’ to God. It invites a continual conversion and giving of ourselves, an ongoing ‘yes’ to the values of the Gospel. It calls on us to say ‘yes’ again and again to our faith, to family, to respect for life, to charity, to forgiveness, to reconciliation. It calls on each one of us to live out our baptismal commitment so that everyone we meet, especially those who seem furthest away or most indifferent, can feel touched by the mercy and love of God,” the Archbishop commented.

The ceremony of the anointing of the sick took place ahead of Mass at 3pm.