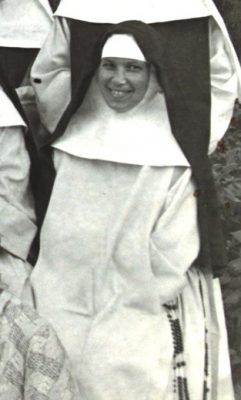 A woman who is believed to be the oldest nun in the world was laid to rest in Poland last week.

The funeral of Sr Cecylia Maria Roszak, aged 110, was held in Krakow.

Born in 1908 in Kielczewo, in western Poland, Sr Cecylia entered the Dominican convent in Krakow at the age of 21, after she had completed her studies at a trade school. Five years later, in 1934, aged 28, she made her perpetual vow.

In 1938, Sr Cecylia plan to travel to the Polish city of Wilno (today known as Vilnius, the capital of Lithuania) with other Dominican sisters to set up a convent there. However, the outbreak of World War II prevented the plan from going ahead. Krakow was occupied by Nazi Germany, and Vilnius became part of the Soviet Union.

But after 1941, when Germany launched operation Barbarossa and attacked the Soviet Union, it became possible for the sisters to travel to Vilnius and set up their convent there.

In Vilnius, Sr Cecylia became a friend of Fr Michal Sopocko, who is best known as the spiritual director of Sr Faustina Kowalska, the visionary saint who is responsible for starting the great Catholic devotion to the Divine Mercy.

The Dominican sisters in Vilnius could not help but be aware of the tragedy of war engulfing Europe at the time. In the wake of the German occupation, the Nazis began to try to exterminate the city’s large Jewish population. Sr Cecylia and the other convent sisters, led by their superior, Mother Bertranda, hid 17 Jewish people in the convent – putting their lives at risk if the Germans found out what they had done.

Several of those that they sheltered went on to become resistance leaders in Vilnius and the Warsaw Ghetto.

According to the Yad Vashem Holocaust Remembrance Institute in Israel, very close relations were formed between the Christian religious sisters and the secular left-wing Jews that they sheltered, despite the enormous difference between the two groups. The Jews addressed Mother Bertranda as “Ima”, which means “mother” in Hebrew.

In 2009, Yad Vashem awarded Mother Bertranda, Sr Cecylia and their colleagues the title Righteous Among the Nations because of their role in sheltering Jews from the Nazis. This title is awarded to non-Jews who risked their lives during the Holocaust to save Jews from extermination by the Nazis.

Sr Cecylia’s funeral Mass was on Thursday at the Church of Our Lady of the Snows, which is attached to the Dominican convent in Krakow. Among the floral tributes was a large bouquet sent by Wanda Jerzyniec who, along with her brother, was orphaned by after both their parents were shot by the Germans in 1944. The pair were sheltered in the Vilnius convent by Sr Cecylia, who by then was prioress of the religious house.

After the war, Sr Cecylia and her colleagues returned to Krakow, where in 1946 she became superior of the community. She was chosen several times as superior of the convent, but she also served as a porter, an organist and a cantor.

The prior of the Dominican fathers in Krakow, Fr Piort Ciuba, said that Sr Cecylia had been active until the very last months of her life. He was impressed by her vitality, youthful spirit and sense of humour. “I remember that a year ago, at 109, she came to the religious choir, where we gave her Holy Communion,” he said in an account of her life published by the Krakow Diocese. “She was always interested in current affairs, the life of the Church and the world. Using a walker, she visited sick nuns. She prayed the Rosary constantly for intentions that came to the monastery from different people.”

After her Requiem Mass, Sr. Cecylia’s remains were buried in the monastic tomb of the Dominican Sisters in Rakowicki Cemetery, Krakow.