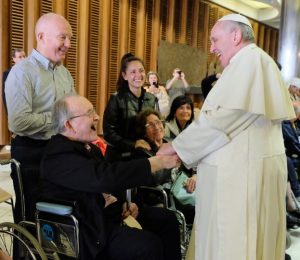 The funeral has taken place of the renowned academic, author, poet and publisher, Mgr Pádraig Ó Fiannachta, who passed away after a short illness.

A native Ballymore in Co Kerry, Mgr Ó Fiannachta, who was in his late 80s, had been a Professor of Irish in NUI Maynooth and was a famed linguist.

He was also the founder of the third level institute in Dingle, An Díseart.

A past pupil of St Finian’s NS in Baile an Ghoilín, west of Dingle, Mgr Ó Fiannachta went on study theology and Celtic Studies in Maynooth.

Ordained in 1953, he served in Wrexham Parish in Wales before his appointment of Professor of Old Irish and Welsh at Maynooth.

He translated and edited the first modern Irish Catholic Bible – a year before the English version was completed in the early 1970s.

Parish appointments in Baile Bhúirne/Cúl Aodh and Glenflesk followed before he returned to Dingle as Canon in 1993.

In 1998 he was awarded the title ‘Monsignor’ by Pope John Paul II.

An author, editor and publisher of note, Mgr Ó Fiannachta was first person to complete the translation of St Augustine’s ‘Confessions’ from Greek to Irish.

He presided over 44 volumes of Colmcille, edited over 280 editions of An Sagart and was editor of Leabhair Maigh Nuad for over 40 years.

In his retirement, he founded third level institute An Díseart in Dingle where students of Sacred Heart University in Connecticut, USA now study.

In 2014, he travelled to Rome where he met Pope Francis, a man he described as a ‘kindred spirit’.

He travelled to the Society’s headquarters on Fifth Avenue in New York to receive an award, which was launched in 1998 in recognition of the contribution of individuals to the cultural life of the Irish in Ireland, America and globally.

His funeral mass took place on Tuesday 18 July in St Mary’s Church in Dingle with burial afterwards in the church grounds of Séipéal Chaitlíona in Ventry.