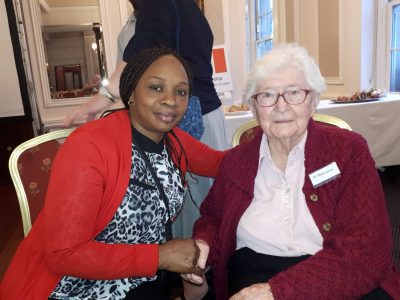 The funeral takes place today of Irish missionary Sr Hilary Lyons who was honoured during her lifetime for her contribution to health services in West Africa, where she worked for 42 years.

A member of the Missionary Sisters of the Holy Rosary, Sr Hilary received an Honorary Fellowship of the Faculty of Public Health from the Royal College of Physicians of Ireland in 2016 in recognition of her health work as a physician, paediatrician, surgeon and obstetrician in Sierra Leone.

The 95-year-old missionary passed away on Saturday 11 January 2020 at her order’s retirement home in Temple Road, Dublin.

Born on 6 February 1924 in Bunlahinch some five miles west of Louisburgh, Co Mayo, she was the eldest of Dick and Bridget Lyons’ nine children.

At thirteen she went to boarding school at St Louis, Balla, Co Mayo where she spent six years.

“At the end of that period I believed myself to have a call to serve people in Africa. Mission overseas was then only achievable by becoming a nun, so I joined the Holy Rosary Sisters in Killeshandra, Co Cavan,” she later recalled.

“This did not please my mother one little bit. The parish priest advised her to let me go to the dances and I might forget it. Now that I am older, I grieve for the pain the decision caused my parents. I was young, gregarious, outgoing and loved dancing. I suppose it came to them like a bolt from the blue.”

Sr Hilary entered the Missionary Sisters of the Holy Rosary in Killeshandra after completing her Leaving Certificate.

The order was founded by Bishop Shanahan in 1924, the year of Sr Hilary’s birth, to provide healthcare and education in Africa.

She later recalled that fateful day. “So, to Killeshandra I went one cold day in February 1943 with my father who was then 70 years old. Training in the religious life in those days was spartan. My natural exuberance was trimmed a little (but not lost!) as I learned silence, discipline and prayer.”

In 1952, she graduated in medicine from UCD and at the age of 29 she was posted to a small rural clinic in the farming village of Serabu in Sierra Leone.

In 1954, the Holy Rosary Sisters took charge of the clinic at Serabu from the St Joseph of Cluny Sisters.

Under Sr Hilary’s leadership the clinic later became a hospital and gained a considerable reputation for the quality of its services and it also established a training unit for nurses and midwives.

As the principal doctor in Serabu, Sr Hilary won renown not only for the development of the hospital’s medical services, but for Serabu’s innovative approach to primary healthcare.

She would later recall, “My medical training was hospital based so my dream was to get a hospital going and treat those who fell ill. This was accomplished by 1970. It was small – 120 beds – with services for surgery, obstetrics, medicine and paediatrics. Our pride was the lovely children’s ward designed so mothers could have a rest when their children were ill.”

“As the only doctor immediately available, I was obliged to respond to surgical emergencies and gained repute as a surgeon.”

A second hospital was also established by the Holy Rosary sisters at Panguma in the eastern province of Sierra Leone.

Sr Hilary also acted as President of the Sierra Leone – Ireland Partnership, leading a delegation in 2003 to meet the Oireachtas Joint Committee on Foreign Affairs seeking to have Sierra Leone added as a priority country to Irish Aid’s programme.

She wrote two books about her rich life experiences: ‘Old Watering Holes, Mayo to Serabu’ and ‘Where Memories Gather, Chuckles and Wisdom.’

In her citation for Sr Dr Hilary Lyons in 2016, Dr Margaret Fitzgerald, Board Member Faculty Public Health Medicine of the Royal College of Physicians of Ireland said: “Sr Hilary exemplifies the best of her generation and ours in medicine and is an inspiration to many of us who worked in global and public health.”

“The Faculty of Public Health Medicine and more recently the whole of RCPI has embraced and supports global health initiatives — many of us here today worked in resource poor countries and were inspired by people such as Sr Hilary.”