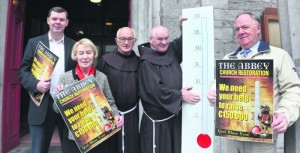 A major fundraising drive is being organised in an effort to raise the money needed to restore a Galway abbey to its original glory.

The Abbey of St Francis was built in 1836 and consecrated by the then Bishop of Galway, Dr Laurence O’Donnell.

In 1849 it was dedicated to ‘The Immaculate Conception’ – the first church in Ireland to bear this title.

The project was led by the then guardian of the community, Fr John Jennings, and the architect was John Cusack, who designed the building in the classic doric style.

The proposed upgrade will involve no structural change to the abbey.

Due to a previously leaking roof, some of the plaster work needs attention including the areas where the wiring has been replaced.

As the backing walls of the confessionals are four feet below ground, there is serious damp soaking into the building that needs urgent attention to remove the dry rot. The belfry is also damp.

Work has already begun on the rewiring as the current wiring is old and dangerous. The lighting will be replaced with LED lights to make the ongoing running costs more economically and environmentally friendly.

A tasteful repainting is also planned to enhance the appearance of the church while emphasising the unique architectural quality of the building.

Speaking to CatholicIreland.net, Fr Eugene Barrett, one of the six Franciscans still living in the abbey said, “We’re the oldest swingers in town – we’re here 719 years at this stage through thick and thin, so we’re hoping the people of Galway will support us.”

A 12-strong committee has been set up by friends of the Franciscan community and members of the congregation to raise at least €150,000.

The scaffolding alone will be very costly and has to be erected in a way as to maintain normal services and not damage the tiled floor.

“It is pretty urgent. The electrics are in an awful state, the damp and wet rot is a very obvious thing. With a view to the Capital of Culture bid, there will be a lot of visitors to the city and we didn’t want them to see a shabby inside,” said Fr Eugene.

Special fundraising events in the pipeline include the ‘Cabaret by the Bay’ on Wednesday, 2 December in the Salthill Hotel with a big line-up of popular singers and performers, including Brendan Shine, TR Dallas and Johnny Carroll.

The first Franciscan foundation in Galway was in 1296 on St Stephen’s Island – the site of the present courthouse.