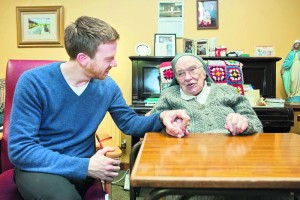 That was filmmaker and television journalist James Creedon’s summing up of Sr Paschal O’Sullivan who died at almost 101 years of age, 75 of which were spent as a missionary in Japan.

Creedon, who works for France 24’s English language service in Paris, spent a year recording the memories of Sr Paschal, a first cousin of his great grandfather’s.

Born Jennie O’Sullivan in 1912, she was the last Irish missionary nun in Japan before she returned home to Ireland at 98 years of age. A move which was difficult for her after she had pledged to leave her bones in Japan.

Her young relative has turned the 60 hours of footage he recorded of his encounters with Sr Paschal and meeting her former students in Japan into a documentary which tells her story of self sacrifice and uplifting generosity.

After school, she joined the Sisters of the Infant Jesus, a French order known in Ireland as the Drishane nuns after Drishane Castle in Millstreet where they had set up a convent and a school.

In the film, ‘Thanks to your Noble Shadow’, she recounts that she only saw her father cry once and that was when he came with her mother to bid her farewell as she entered the convent.

She arrived in Japan in 1935 with no language and ill-equipped to deal with this radically different culture. She spent most of the war years interned.

But post World War II, she returned to teaching and came to love her Japanese students, colleagues and friends, who in turned loved her.

Speaking at the private screening of the documentary film in the Chester Beatty Library in Dublin Castle, James Creedon said that “what happened in Irish society in the last 10-15 years is this big cathartic revelation of the dark side of the Catholic Church’s influence on Irish society.”

He added, “But maybe we’ve forgotten some of the essential aspects and some of the truth that was certainly at the core of how she (Sr Paschal) lived her life.”

Reminding his audience that Irish missionaries went all over the world, he said he believed the film would be of interest to a younger generation that have little sense of the beliefs of Sr Paschal. But he felt that because she embodies universal qualities, “Every culture can relate to that,” he said.

Of the friendship which developed between him and Sr Paschal, he said he was “Personally very proud of her – the dynamism of her personality, the breath of her experience.”

He added that she was herself throughout the year long project and she shone the whole way through.

“She is somebody we can all learn something from. Certainly in terms of how to age and how to look back over your life and how to not have regrets,” he said.

“What was it about the life she had lived that made her into the person she was at 100 years of age – so vital and energetic and joyful and generous.”

“I was trying to figure out what was it about how she lived that she got right and that is maybe worth transmitting.”

James Creedon is hoping the film will be taken up at film festivals over the next 12 months.

“The film is edited and ready for screening but I’m looking for €40,000 for funding past costs and paying for post-production so that the film can be distributed, entered into film festivals worldwide and broadcast on television.”

He has set up a crowd-funding page. To support the movie, search for ‘Thanks to Your Noble Shadow’ go to: www.indiegogo.com or visit 75yearsinjapan.wordpress.com/fundraising

Thanks to your Noble Shadow also has a Facebook and Vimeo page.