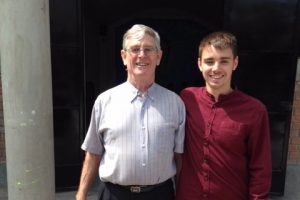 A nephew of Fr Gerard Desmond has set up a Go Fund Me page to recoup parish money stolen by robbers who beat and shot a missionary in Peru.

The priest is recovering well from his injuries and preparing to return to his parish, nephew Michael Kelleher said and explained that €1,643 of a €1,700 target had been donated by 29 people in 9 days via the internet fundraising website.

His uncle, a 70-year-old Irish Columban missionary priest, who has worked for 20 years in Lima, Peru, works in the parish of Christ the Liberator in the slum district of San Juan de Lurigancho, outside Lima.

On 28 April, Fr Gerard Desmond returned from a bank in Lima with the equivalent of US $2,000 (€1,655) to pay the wages of builders who were working on the only primary school in the district. As he got out of his car, three men with guns demanded the money.

Fr Desmond did not want to part with parish money and tried to fight them off, but they hit him on the head with the gun and shot him in both legs above the knee.

The priest received 14 stitches to his head and several more on the leg wounds. A few days after he was released from the hospital, he went to the USA to recuperate with family. His nephew has since set up the fund.

“Any money raised will go to the parish to pay the builders and any surplus will be spent on improving facilities in the school,” he said. “We, and those who live in his parish, will be extremely grateful for any money raised.”

His niece Deirdre Hansen told TheJournal.ie that her uncle knew the risks and did not complain. She added that he felt he should not have tried fight the robbers off but he has always been very fit.

Those who wish to donate to the fund can do so at  https://www.gofundme.com/recoup-money-stolen-from-a-priest