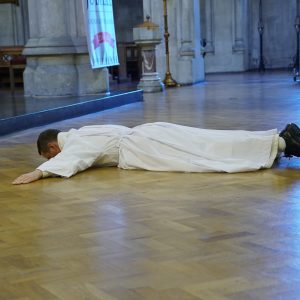 A former Manchester United player, Philip Mulryne, who was capped 27 times for Northern Ireland, was ordained a deacon last week and is due to become a priest next year.

Mulryne, who was an accomplished striker, midfielder and right-winger, was part of the Manchester United squad between 1996 and 1999.

Because of the dominance of established players such as David Beckham, Nicky Butt, Paul Scholes, Andy Cole and Ole Gunnar Solskjaer, however, he made few first team appearances. He only played one league match for United, on the last day of the ’97–’98 season, in a match against Barnsley.

In a bid to get more first-team playing opportunities, Mulryne transferred to Norwich in March 1999. He missed most of the 1999–2000 season after he suffered a broken leg, but he was part of the squad that secured promotion into the Premier League for Norwich in 2004. Subsequently, he played for Cardiff City, Ipswich Town, Brighton & Hove Albion, Legia Warsaw, and Barnsley. In 2008, it was announced that he was training with Cliftonville.

A year later, in 2009, he began training for the priesthood and studied at the Irish Pontifical College in Rome. In September 2015, he made his profession to become a Dominican friar at St Saviour’s Priory in Dublin. It was there, last week, that Archbishop Diarmuid Martin of Dublin ordained him deacon. God willing, he will be ordained a priest next year.

As a professional footballer, it is reckoned that his career earnings were in the region of £500,000. As a Dominican, however, he is living according to a vow of poverty.

In a video interview posted by the Daily Mail, the 38-year-old deacon said: “To give oneself completely to God through the profession of the evangelical councils, to take him as our example and despite our weakness and our defects, trust in Him that he will transform us by his grace, and thus being transformed, communicate the joy in knowing him to everyone we meet – this for me is the ideal of Dominican life and one of the major reasons of what attracted me to the order.”

He is not the first clergyman to be associated with soccer. As a youth, Saint Pope John Paul II was devoted to ‘the beautiful game’ and played many times as a goalkeeper.