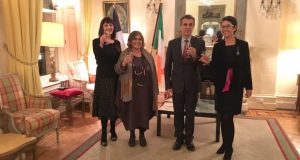 Louise Curtin is pictured first on the left, accompanied by the other recipients of the award, and the French Ambassador H.E. Stéphane Crouzat who is pictured second from the right. Pic courtesy: Jesuit.ie

A teacher at a prominent Dublin faith school has been honoured by the French state for her achievements in the educational and cultural spheres, and for her promotion of French language and culture.

Louise Curtin is a French teacher at Belvedere College in Dublin.

She was recently presented with the Chevalier dans l’Ordre des Palmes Académiques at a reception at the French Embassy in Dublin.

The Ordre des Palmes Académique was created by Emperor Napoléon Bonaparte originally to honour eminent members of the University of Paris. It was changed into its current form as an order in 1955 by President René Coty.

She has had the most success with boy’s teams in the history of French debates in Ireland.

It was Belvedere headmaster, Gerry Foley, who recommended Louise Curtin for the award.

“During the past nineteen years, Louise has shown herself to be extraordinarily passionate in imparting a love of the French language to all her students. A true Francophile, she endeavours to promote all aspects of French culture in her classroom. From music, to food, to literature, to film and theatre, she creates a little corner of France in our Dublin city centre school and in the heart of her students,” Mr Foley said.

Outside the classroom, Louise co-ordinates the school’s annual French exchange programme which is the largest and longest-running exchange in the College.

This affords 35 students, the opportunity to immerse themselves entirely in everyday life in French culture and language in Lyon.

A very high level of commitment is required as Louise travels to France with the boys and receives the exchange students from their partner school, Lycee Saint Marc in Lyon.

The teacher is also a very talented musician who is actively involved in the school’s musical activities including being conductor of the Chamber Orchestra.

“It was so wonderful to receive this award surrounded by my family, colleagues, friends and past pupils,” Louise said after the presentation.

“It is an evening that will live long in my memory.”

Some of Louise Curtin’s students, meanwhile, will be taking part in the annual Belvedere College SleepOut to raise money for charities working with the homeless, and to raise awareness about the issues around homelessness, from 22-24 December 2017.

This year over 100 students, teachers, past pupils and parents will be sleeping out in Dublin’s inner city to raise funds and awareness for Focus Ireland, the Peter McVerry Trust and HomeAgain.

Students participating in the SleepOut have highlighted that 18 babies were born into homelessness last year. They spent their first day without a home.