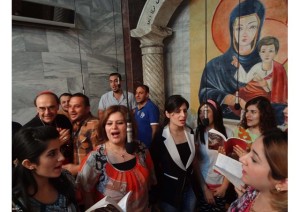 Cardinal Philippe Barbarin of Lyons sings with Iraqi Christians in a church in Kirkuk on 31 July.

Among those they met were numerous Christians who fled Mosul last month, following the threats of Islamic extremists to either convert to Islam, pay a tax or be killed.

Speaking to Vatican Radio on his return to France on Friday, Cardinal Barbarin, Archbishop of Lyons, said he was moved by the joyful welcome of these communities, despite the difficulties they have lived and everything they have lost.

Iraqi Christians have been persecuted for centuries, he added.

He remarked on their witness to their faith in Jesus Christ and noted that none of the Christians who fled Mosul were killed by the Islamists.

They also met Iraqi Christians, several times per day, in various centres in each of these cities. The Cardinal said he listened to their stories and was strengthened by their witness.

He said Christians in Iraq felt they had been forgotten but were encouraged by the visit of the French bishops, as well as by the demonstrations that were organised in France in a show of support for Christians in Iraq.

According to Vatican Insider, the French Cardinal pledged to some of the Iraqi Christians he met that he would recite the ‘Our Father’ in Aramaic, the language of Syriac Christians, every single day until they are able to return to Mosul.

French Catholics have also organised a special collection for refugees who fled from Mosul.

Cardinal Barbarin said he met with Patriarch Louis Raphael Sako, who was himself exiled from Mosul but whose ministry now consists of visiting his dispersed flock.

“You cannot imagine how important this visit of yours is: you have given them back their courage,” Patriarch Louis Raphaël I Sako, the head of the Chaldean Catholic Church said, according to Cardinal Barbarin.

“They can see that there is physically someone thinking of them.”