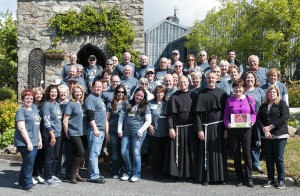 St Francis University group from the US visit the bell tower at the remains of the Franciscan monastery in Roundstone.

A group from the oldest catholic Franciscan university in the US visited Galway earlier this month to celebrate the link between the West of Ireland city and Loretto in Pennsylvania.

The delegation from St Francis University travelled to Ireland to trace the footsteps of six friars who departed Connemara in the 19th century and went on to establish in 1847 what is now regarded as one of the most prestigious catholic universities stateside.

Saint Francis College was established on land in Loretto given by Bishop Michael O’Connor, the first Bishop of Pittsburgh. 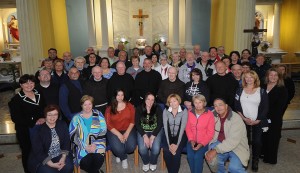 During the American group’s visit to Galway, they learned first-hand about the friars’ Irish roots, where they worshipped before they departed for the US and their local environment.

The delegates were hosted by Celtic Footstep, a destination management company based in Furbo, Co Galway and headed up by Kerry O’Sullivan and Kathleen McDonagh.

As part of their trip, the group also visited the Book of Kells, Glendalough, Newgrange and the North Coast.

They met Br James Mungoven from Clifden who gave a talk on the history of the Franciscan monastery that was established in Roundstone. 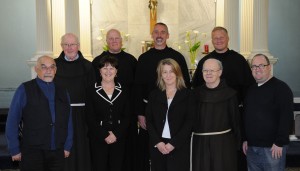 Br Mungoven is an expert on the link between Roundstone and Pittsburgh and he showed the US visitors the remnants of the former monastery.

Today the remains of a bell tower still stand.

The delegates also visited Kylemore Abbey where Mass was celebrated by Fr Malachi Van Tassell, President of St Francis University, and they later held Mass on the Aran Islands.

The delegation was also hosted by the Franciscan Brothers at the Abbey on Francis Street in Galway.

“This was a hugely significant visit for the delegation and one that was spiritual but very fitting to mark the achievements of the brothers that left Galway,” said Kathleen McDonagh of Celtic Footstep.