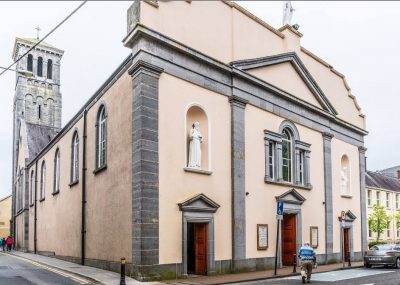 He said it was “with deep regret” that the Franciscans decided that “from the beginning of May 2019, there will no longer be a resident Franciscan presence in Waterford. Given the fact that one of the most illustrious members of the Order, Fr Luke Wadding OFM, was a native of Waterford, this decision was not taken lightly or with any disregard for history.”

He explained that like many other religious institutes the Franciscan Province of Ireland has had to face the reality of withdrawing from many locations across Ireland in the last two decades.

“This is something that is always decided with heavy hearts yet with a deep sense of gratitude to the people among whom the friars have lived and ministered,” he said.

The local Bishop, Alphonsus Cullinan, Diocese of Waterford and Lismore, spoke on behalf of the the diocese, stating: “It was with great sadness that I learned about the decision of the Franciscan Order to leave the Friary in Lady Lane, Waterford. I can appreciate their huge difficulty in arriving at that painful decision. The contribution of the sons of St Francis for almost 800 years since the mid 13th century is almost incalculable.”

He expressed thanks and gratitude on behalf of the people of the diocese for all the Franciscans achieved, especially through prayer and care of the sick through the hospital chaplaincy. He asked for prayers for an increase in vocations to the Franciscan Order in Ireland and thanked the friars for offering the friary to a religious order that has been looking for a place to start a Foundation in the diocese.

On the popular website ‘Waterford in Your Pocket’, the people of the city also expressed sadness at the friars’ departure.

“Sad but a sign of the times,” stated one.

Another said: “Sad but without vocations what can be done?”

Someone else posted a picture of the Blessing of the Animals by a Franciscan brother in 1989.

Another said: “The Franciscans have done so much that has gone unnoticed for years. Waterford will be a poorer place without them.”

“I love this church and have been lucky enough to be there for the Easter Morning Service only a few years ago,” stated another.

Many friars have lived in the present Friary and ministered to the people in the confessional, from the pulpit, at the altar, and in the Friary. In recent years they have also been chaplains for the industrial estate and Waterford University Hospital, as well as chaplains and teachers in the Regional Technical College (now Waterford Institute of Technology (WIT)).

The Franciscans are also associated with the nationwide housing association Respond, which was founded by Fr Pat Cogan OFM, a member of the Waterford fraternity.

“All have happy memories of living and working in the city,” Fr McGrath said.

For as long as they are able, the friars in Clonmel will take charge of the Franciscan Church at Lady Lane and will maintain the sacred ministry there. The Friary itself is expected to become the residence of a community of sisters.